Inflation In Russia and Ukraine

The inflation bonfire just burns and burns, across a group of countries originating in the Baltics, passing through Bulgaria and Romania, then on up via Poland and the Ukraine to Russia. As I say in my last post, the only real doubt is whether or not this is some sort of geometric progression which extends itself all the way out to China. This will be the big question we should get answered in 2008.

Essentially the Baltics have been the "canaries in the coal mine", giving us an early warning signal about what was about to happen.

And the common factor here? Well try looking at the underlying long term fertility in all these countries in the context of their need to close the income gap, as Claus Vistesen explains in this extensive post here, and as I try to explain in this post on Russia, and this one on Ukraine. People have long been telling us that the demographic dividend was far from mechanical, but few took the trouble to think about what actually happened if you missed getting it altogether.

Russia's inflation rate rose in 2007 to the highest in four years in December as the government proved unable to put a brake on food prices and wages even while investment soars. The rate for the year rose to 11.9 percent from 9 percent in 2006, the first time that the rate has surpassed the previous year since 1998, the Moscow-based Federal Statistics Service Rosstat said today. Consumer prices rose 1.1percent in December, compared with a 1.2 percent advance in November. 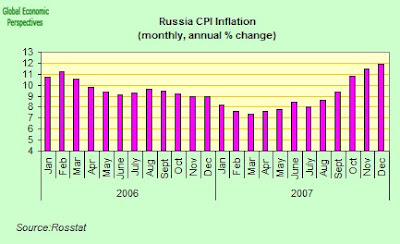 Russia, the world's biggest energy exporter, has struggled to curb inflation as record oil income has boosted salaries and global food prices have increased. In an attempt to try to stop the upward march of food prices the government cut dairy and vegetable oil import duties, sold grain from state reserves and added a grain export duty. A number of companies even agreed in October to freeze prices on some milk, vegetable oil, egg and bread products until Jan. 31.

Food prices rose a monthly 1.6 percent, compared with 1.9 percent in November. Food price growth was led by fruit and vegetable prices, which slowed from November's rate of 6.2 percent to 5.6 in December, according to the statistics service.

The Organization for Economic Cooperation and Development said in a December report that the Russian government's ``massive additional spending'' before elections also helped push up inflation.

Legislators approved additional budget outlays this year as the nation prepared to hold parliamentary elections on Dec. 2 and a presidential vote in March 2008.

Ukraine's annual inflation rate accelerated to 16.6 percent in December, the fastest since 2000, on rising prices of food and fuel, the state statistics committee reported late yesterday. Ukraine's inflation rate surged from 15.2 percent in November, which was the highest in Europe for that month. Food costs increased 23.7 percent in December from a year earlier. Consumer prices rose 2.1 percent from the previous month. 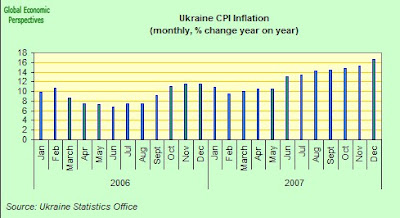 Really I have very little more to say on all this that hasn't already been said in this post (or in this much longer and fuller attempt at diagnosing the Ukranian issue). Prime Minister Yulia Timoshenko said at a Cabinet meeting in Kiev that ``The government should approve a plan of anti- inflationary measures.'' But this is just the point, since at this stage noone is very clear what can be done about all this, as inflation moves from one Eastern European country to another like a stack of dry timber catching fire.
Posted by Edward Hugh at 10:23 AM