Well this is all about to get very interesting indeed, as Ben Bernanke indicates the Fed's willingness to cut interest rates agressivley to try and skirt the recession danger. Meanwhile some central banks in more or less solid developing countries - Chile, Brazil, Thailand, Turkey, India, even Argentina - are under pressure to raise rates, and hence can find themselves facing the "kiwi effect" as more money flows in to fuel the inflation the central bank is trying to contain. My feeling is that the underlying conditions in the above mentioned economies are sufficiently strong to withstand this pressure, and as a result what we will see is very rapid "glosing of the dollar value of GDP" gap in these countries. Eastern Europe, Russia and possibly even China (China is where I have the graetest doubt) will probably be a very different story.

But today it is the turn of Chile, as the central bank raised its benchmark lending rate to the highest in six years as it seeks to curb the fastest inflation in a decade. Policy makers raised the benchmark rate a quarter point to 6.25 percent in a meeting yesterday.The bank acted in response to inflation that climbed to an annual rate of 7.8 percent in December, driven by higher costs for food and transportation. The question is, with the US Fed set to lower rates rapidly, will this move curb inflation, or attract funds which can only serve to accelerate it. With the Peso set to rise, dollar denominated loans are going to look increasingly attractive to Chilean clients? Yesterday's was the second consecutive monthly increase as the bank tries to bring inflation down to its target for two years from now: 3 percent plus or minus 1 percentage point. The bank's overnight lending rate has risen from a low of 1.75 percent in the first eight months of 2004. 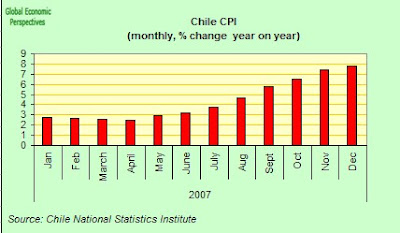 December's inflation was a ``significant surprise,'' the central bank said after the meeting. ``Further additional adjustments may be necessary to guarantee that inflation converges with the target rate.''

The Chilean peso rose to its highest level versus the dollar since 1999 today on expectations the central bank would lift rates while the U.S. Federal Open Markets Committee cuts. 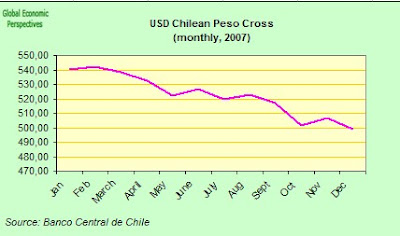 Chile's economy grew 4.6 percent in November from a year earlier. It is the only Latin American country to have closed its income gap with the U.S. since 1990, as surging demand for the country's exports has stoked expansion, Finance Minister Andres Velasco told El Diario Financiero last week. 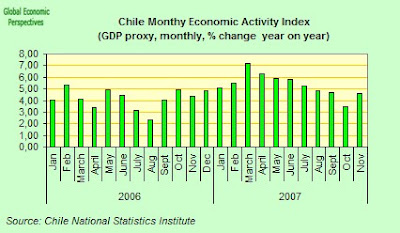 The difference between own currency GDP growth rates, and dollar denominated growth rates can be seen clearly in the two charts that follow. IMHO it is this fundamental currency rebalancing that is driving a lot of the action in some emerging economies at the present time. 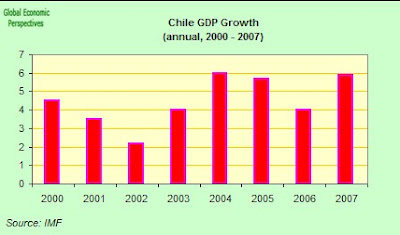 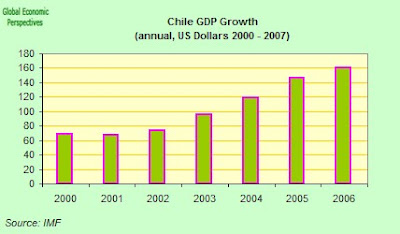