Is The German Economy Resisting?

Germany's economy continues to show signs of bucking what in many ways could be thought of as a global slowdown trend. But just how real are the possibilities that Germany can escape from the problems that seem to be affecting many of the world's largest economies? Let's take a look at some of the most recent data.

German unemployment fell for yet another month in March, reaching its lowest level since August 1992 as worldwide demand for cars, sports shoes and factory machinery prompted companies to add staff to fuel the export machine. The German jobless rate, adjusted for seasonal changes, declined to 7.8 percent from 8 percent in February, the Federal Labor Agency in Nuremberg said today. 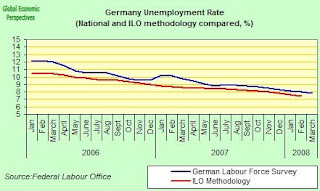 The adjusted number of people without work fell by 55,000 to 3.29 million, the labor agency said. In western Germany, the number of people out of work declined by a seasonally adjusted 36,000 to 2.15 million in March, while the number in eastern Germany dropped by 19,000 to 1.14 million. According to the latest ILO comparable data Germany's jobless rate was 7.6 percent in January, compared with 7.8 percent in France, 3.8 percent in Japan and 4.9 percent in the U.S. The OECD average for the month was 5.5 percent. 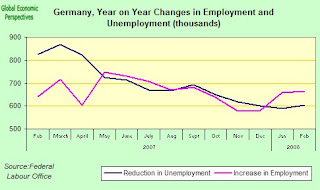 German unemployment has now fallen for 26 months in a row. As we can see in the chart above unemployment has been trending continuously down, while the rate of new jobs creation seems to have stalled slightly between September and December, and then picked up again in January and February (remember these are year on year numbers, so largely deviod of seasonal fluctuation) and this is pretty consistent with a picture we are receiving from other quarters. The German economy is being powered by its export sector, and by the capital investment neeeded to keep this firing on all six ylinders. As if to confirm what I am arguing, German plant and machinery orders rose 10 percent in February from a year earlier, driven by domestic sales, which jumped 12 percent, according to the VDMA machine makers association in a press release earlier this week. Foreign sales also remained strong, gaining 9 percent, but it is the domestic demand which is important here, since all those factories producing all those exports need to be continually re-equipped.


Retail sales in Germany, on the other hand, had their biggest month on month fall in almost a year in February as faster inflation, and not especially strong increases in average earnings, eroded consumer spending power. Sales, adjusted for inflation and seasonal swings, fell 1.6 percent from January, the Federal Statistics Office in Wiesbaden said today. That's the biggest month on month drop since May 2007.

According to provisional results of the Federal Statistical Office, in February 2008 turnover in the German retail trade was in money terms 2.4% larger and in real inflation adjusted terms 0.3% smaller than in February 2007. There was even one extra shopping day in February 2008 - 25 - as compared with February 2007 - 24. 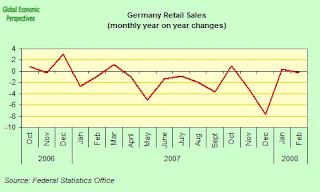 Taking the two months together and comparing them with January-February 2007 retail turnover was up in nominal terms by 2.4% and exactly equal in inflation adjusted real terms to the turnover achieved in the first two months of 2007. If we look at the chart for the seasonally adjusted monthly index we can see that the general trend since March/April of 2007 has been steadily downwards, which is just another way of saying that the German economy is now almost completely dependent on exports (and the capital investment necessary to be able to produce them) for obtaining economic growth. So it seems a little hopeless to imagine that at this point a recovery in domestic consumer demand is going to sustain the economy should exports start to flag. 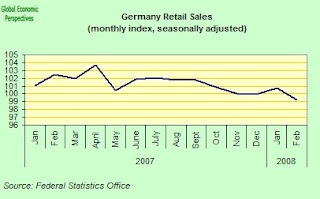 German policy makers who may have been relying on consumers to help fuel growth as a U.S.-led global economic slowdown may ultimately threaten exports, will find these results very disappointing. While consumer and business confidence all rose last month and as falling unemployment should in theory help support consumption, inflation running close to the fastest pace in 12 years is surely starting to impact on consumer spending power. 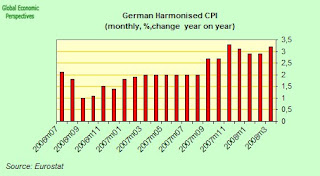 If we look at the retail sales Purchasing Managers Index chart (the PMI gives us a slightly different, and more "as it happens", reading on retail sales), we should note that even though retail sales have been hardly spectacular in the first three months of this year, they are also hardly collapsing, and the March reading suggests they will hold up at least one more month. This reading is consistent with a lot of other data we are getting at the moment, and does suggest that even though consumption will not drive growth, neither is it going to "crash" it, and it at least mirrors the underlying "push" which is still being sustained in the exports and the industrial production areas. 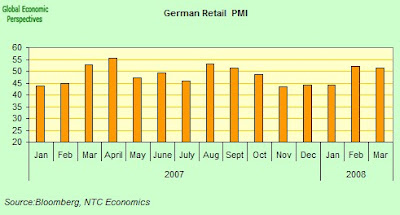 On the other hand inflation is becoming a real problem. GfK AG, the Nuremberg-based consumer research company, said March 27 that if inflation doesn't abate, German consumer-spending growth may fall short of evn its 1.5 percent 2008 growth forecast.

``Should the inflation rate remain significantly above 2 percent this year and therefore stay higher than initially assumed, then private consumption will only increase by up to 1 percent this year,''

Even so, GFKs consumer confidence index rose for the first time in three months in April as continuing employemnt growth appeared to havve boosted households' willingness to spend. Germans' income expectations and a gauge measuring their optimism about the economic outlook rose, according to the index.

Germany's manufacturing sector expanded in March at its fastest pace in seven months, driven by output growth and a record increase in employment, the NTC/BME manufacturing Purchasing Managers' index showed on Tuesday. The survey also pointed to a rise in orders at manufacturing firms, with demand from abroad proving resilient despite strength in the euro, which makes exporters' goods more expensive outside the single currency zone. The NTC/BME Purchasing Managers' index (PMI), based on a survey of around 400 firms, rose to 55.1 from 54.3 in February -- reaching its highest level since August. A reading above 50 indicates expansion. 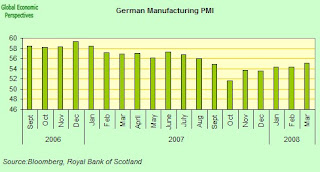 The March reading surpassed an NTC/BME "flash estimate" issued on March 20, which saw the index at 54.9.

An index on employment rose to 56.5 from 55.3 in February, hitting its highest level since the survey began in April 1996. German unemployment hit a post-war high above 5 million in March 2005 but has since fallen steadily, helped by solid economic growth and hiring by companies to meet firm demand. Joblessness fell for the 23rd straight month in February.

The NTC index on new orders accelerated to 54.9 from 52.8 in February. Another on output eased to 54.7 from 56.0 but remained well above the 50 threshold between expansion and contraction. The strong PMI reading fits in well with the recent reports from the Ifo and ZEW economic institutes showing German corporate morale rose in March, suggesting the economy is proving resistant in the short term to problems in the United States.


Conclusion, It's The Exports to Eastern Europe Silly


The manufacturing, and employment and retail sales PMIs for March thus add to a number of other signs which we have been noting on this blog that the German economy is currently resisting the slowdown in global growth, the record oil price and the recent euro highs against the dollar. One very large part of the explanation - as explained in detail in this post - may very well be the rapid rate of expansion which still continues in many East European economies and Russia, which are very very important to German export performance (and especially now that previously strong customers like Italy and Spain are gradually sliding away and over the horizon). So how long will the German resistance continue? Just as long as the strong expansion in the Czech Republic, Poland and Russia continues I would say. Just that long and no longer. This is what export dependence means.
Posted by Edward Hugh at 3:52 PM No comments: