Monetary policy experts in the Czech Republic are having second thoughts about the advisability of adopting the euro in the near future, based presumeably on the experience of those who have gone for rapid euro convergence. According to central bank board member Robert Holmanhe the Czech Republic is "not ready" to adopt the euro because giving up the koruna could cause the economy to overheat, (he has obviously been looking over his shoulder at what has been happening in the Baltics, Bulgaria, Romania etc).

The koruna's appreciation against the euro has lifted prices near the level of those in countries that have been European Union members longer, Holman wrote in a commentary in Mlada Fronta Dnes newspaper today. Losing the ability to allow the the koruna to appreciate would be reflected in a quickening pace of inflation, he said. This may not be exactly the situation, but he is scratching in the right area, and loss of control over monetary policy - as we are seeing now in the cases of Ireland and Spain - can create special "overheating" problems, which when corrected may produce a mini boom-bust type cycle.

``We would have to live with European interest rates that would undoubtedly be too low with regard to higher domestic inflation,'' Holman said in the article. ``Our economy would overheat, which could have fatal consequences.''

This is basically what appears to have happened in the cases of Ireland and Spain with their domestic housing booms based on long periods of negative real interest rates. Holman said that once the Czech Republic enters the so-called exchange-rate mechanism - which basically offers a pre-entry test of currency stability before the switch, a commitment will have to be made to limit the koruna gains, and this could well lead to an acceleration in price growth which would not be appropriate to the low interest environment. I think Holman has a strong point here, and I think it is one which did not receive sufficient thought before Spain and Ireland were admitted - since they were always liable to have a lengthy period of rapid catch-up growth where a rising currency would have been more appropriate.

"A country that is only going through a process of real economic convergence with the euro zone cannot fulfill the low- inflation and currency-stability criteria at the same time,'' Holman wrote. He also added that once the Czech Republic gives up its own currency all ``economic shocks'' will be transmitted to unemployment and inflation. "That is not a good alternative for our employees and consumers....It's better to have a domestic currency with a flexible exchange rate."

Of course we could call this learning by doing, but I would say better late than never. For a day by day insight into the kind of mess that can result from not heeding Holman's warning can be found by following events on this blog about Spain, and starting particularly with this post.

The Czech koruna rose to a record against the euro for a second consecutive day yesterday as investors bet the central bank will raise the European Union's lowest interest rates to stem accelerating inflation. 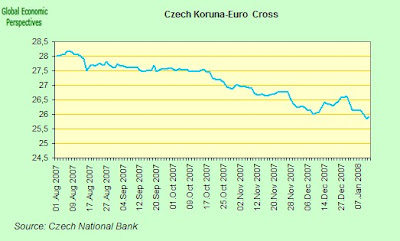 The koruna, the best emerging-market performer this year, gained versus 14 of the 17 most-traded currencies as a report yesterday showed Czech inflation accelerated to 5.4 percent in December, exceeding the central bank's target for a second month. Policy makers now seem set to lift the key benchmark rate at some point in the not too distant future, possibly in February.

Annual inflation last month accelerated to the fastest since August 2001. 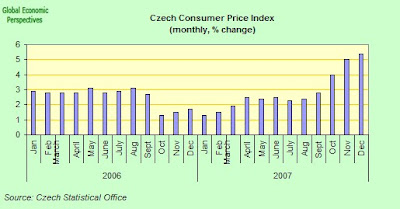 The koruna was also underpinned by a larger-than-expected trade surplus, which widened in November from the previous month as imports grew at the slowest pace in 19 months. The surplus was at 11.3 billion koruna ($641 million) compared with 8.6 billion koruna in October, according to the statistics office data released today. 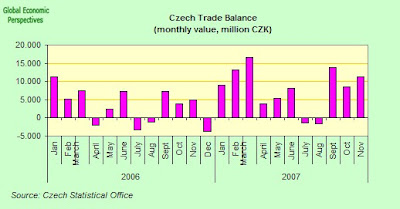