The German economy is now clearly losing momentum as a stronger euro makes exports less competitive and near-record oil prices drive up inflation, leaving households with less money to spend. Exports, when adjusted for working days and seasonal swings, slid 0.5 percent from October the Federal Statistics Office in Wiesbaden said today. Anyone who can't figure out what the chart below is saying needs economic literacy classes, IMHO. 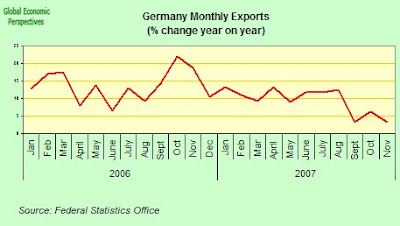 Retail sales in November also dropped 1.3 percent. More importantly ..."as shown by estimates of the Federal Statistical Office (Destatis), the 2007 nominal retail turnover in Germany is expected to be between 0.7% and 1.0% smaller than in 2006." 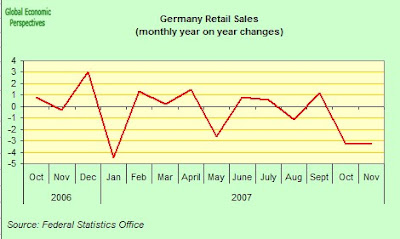 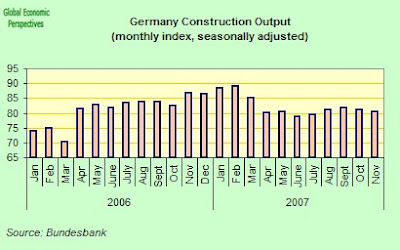 
One of the thing which strikes me about all those false hopes for a sustained recovery that people are forever being offered in Germany and Japan is the corrosive effect that this can have on the psychology of all the ordinary people who are on the receiving end.

What Claus and I have been noticing is just how hard it is for people to take seriously the idea that there may be a long term underlying problem in these countries associated with years of very low fertility and population ageing. In both countries now, after years of hard and difficult reforms - what the Economist calls "cultural changes" - people may be less ready to receive yet another dose, and will quite possibly be willing to try different ideas and other formulas. Some indication of this is to be seen in the recent defaut of the LDP in the Japanese Upper House elections and the early departure of Abe.

So enter another argument. Consumption is weak because wages and salaries are too low. Companies in Germany and Japan have lots of profits,while what they don't have are wages, and hence internal consumption. To some extent, of course, this is the case. The question is why.If wages are trending downward in Italy, Japan and Germany as aggregate population age rises there may be some productivity and human capital related explanation for this, as I explain in my recent extensive study on the German labour market.

So it may be that - as the Financial Times reports this morning - we see some serious attempt in the short term to raise wages.

"German government and union officials gather on Thursday in the baroque town of Potsdam outside Berlin to start wage negotiations for the country's 1.3m civil servants, kicking off what the head of the country's largest trade union predicted would be a year of "mega-wage deals". After years of wage stagnation in Europe's biggest economy, calls for substantial pay increases are growing louder – and prompting warnings from economists about the potential impact on jobs and inflation."


Such an attempt to increase the wages share in German National Income in not supported by productivity and value chain shifts will, unfortunately, do more harm than good by slowing down the pace of job creation, and pushing up inflation in the short term. Since this will be unsustainable, as the economy slows the danger can then very rapidly shift from inflation to deflation. There are now no easy "instant coffee" policy solutions available to the underlying problem in Germany. The first step in begining to make the best of a bad job would be to recognise that what is happening actually is happening. Reading the majority of commentators at this point I fear we are still a long way from that recognition, so it seems things will continue to get worse before there is any chance of them getting better. I emphasise, the most important step towards begining to do what can be done now in Germany passes through a general recognition of the problem being faced. Without this there is little hope of real progress.

Conclusion, Have We Been Here Before?

To close, just a couple more graphs. We can see from the most recent export y-o-y chart that export growth is now slowing significantly, and that we are now entering the downward phase of the whole cycle. We have, of course, been here before, after the collapse of the internet boom.

It may be worth reminding ourselves at this point what ectually happened last time round, ie the last time the acceleration in the Y-o-Y growth rates in German exports effectively stalled. That was back in early 2000, as we can see from the chart below. And what happened at that next? Well the fed was easing as the US entered recession, and the euro was to some extent rising, both of which put a strong break on German exports. And after export growth collapsed, German GDP growth wasn't far behind. So it isn't the rise in the currency alone that matters, you have to think about the whole environment which produces it. Why your currency is rising, while someone else's is falling. And of course, in German export terms, after the rise comes the fall. This is the cost of not being able to depend on your own internal demand, you have to depend on someone else's demand. 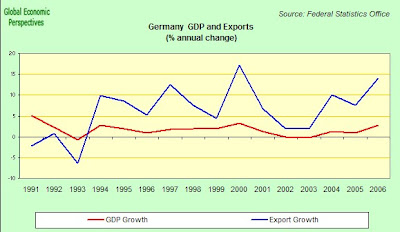 Secondly, we should also think about what happens to employment creation and unemployment as GDP growth stalls. The chart below offers a comparison of movements in the two main unemployment indicators for Germany - the ILO comparable one, and the national German one - from the early 1990s to date. As can be seen the stall in GDP growth produced the rapid rise in umeployment after the summer of 2000, as win-win became lose-lose. I don't see why the picture shoud be that different this time round. The ageing population component in the slowdown will - if anything - be worse this time (the median age is higher). The labour market arguments are outlined in much more depth in this post. 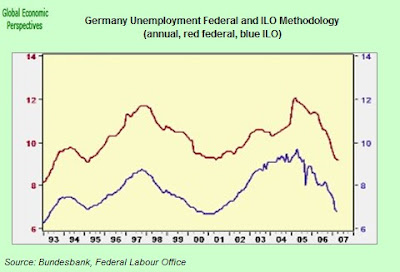