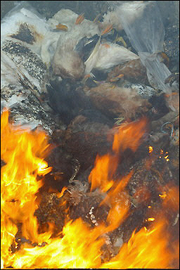 The photo comes from this story about confirmation of the fact that the avain flu strain found in Romania is in fact H5N1. The photo purportedly shows birds being destroyed in the Romanian village of Ceamurlia de Jos, and is accompanied by the following caption: "Birds are incinerated at the Romanian village of Ceamurlia de Jos. The bird flu strain that has killed over 60 people in Asia was confirmed to have arrived on mainland Europe for the first time, adding urgency to crisis measures to stop a feared pandemic."

I don't really know what image the photo is meant to conjure up in our minds. It seems more like a contemporary art representation of the final judgement (definitely not 'The Last Supper'). If this kind of thing is meant to discourage people from panic, well...

Meantime I have some more sober assesments and debate on Afoe here (and in the comments).
Posted by Edward Hugh at 4:49 PM

Gourinchas and Rey and the 'Tipping Point'

Bloomberg's John Berrry has a lengthy and informative piece on the paper by Pierre-Olivier Gourinchas and Helene Rey "From World Banker to World Venture Capitalist: U.S. External Adjustment and the Exorbitant Privilege". Berry's main point is the following:

The U.S. may be approaching a dangerous ``tipping point'' in its international transactions.

That stunning disparity in returns is one of many reasons why the huge U.S. current account deficits of recent years have been so readily financed. The sagging net investment position wasn't being compounded by an ever higher interest bill -- as is the case with the mounting U.S. government debt.

This year the game has changed.

Net U.S. investment income turned negative by $455 million dollars in the second quarter, marking a swift deterioration from a $15 billion surplus in the first three months of 2004.

If this trend continues -- and there's no reason to think it won't -- the U.S. will be paying a steadily rising net amount to foreigners, and those payments will both increase the U.S. current account deficit and worsen the country's net investment position.

This is an important point. But I personally don't think we are at - or anywhere near - that tipping point right now.
Posted by Edward Hugh at 10:59 AM

I am sure there are plenty of people who would accuse me of selectively reading the data on Japan. Maybe sometimes this is true. So today we have the positive news that lending by Japanese banks increased in September for the second straight month.

The 0.4 per cent year-on-year rise in bank lending in September came after adjustments for special factors such as write-offs and securitisations. This measure is regarded as a better indicator of the overall trend than the unadjusted figures – which showed lending in September continuing to decline but at a slower pace.

Analysts have differed on whether the recent improvement in the lending figures indicate primarily that banks are more willing to lend now that they have cleared up their balance sheets, or that businesses are more eager to borrow.

On the other hand, as the article points out:

Some analysts were cautious about Thursday’s announcement, pointing out, for example, that lending by public financial institutions, which was not included, had been falling sharply.

at the same time news is in that there was a 15.6% fall in Japan’s current account surplus in August. The value of exports increased by 8.8%, but imports rose 24.1% – boosted largely by the high oil prices.
Posted by Edward Hugh at 10:44 AM

What was I saying yesterday? Well here we are today, Japanese consumers are not as happy as the theory says they should be:

Consumer confidence in Japan declined in September from the previous month, according to a survey released on Wednesday by The Cabinet Office. Its sentiment index for ordinary households (those with two or more people) fell to 45.5, down 2.9 from August.The survey covers outlooks on four variables – living conditions, income, job conditions and willingness to buy durable goods.

This Man Understands Almost Nothing

John Snow is on tour again, and as usual he is busy shooting his mouth off about things over which he seems to exhibit an inordinate level of general ignorance. This time he is in Tokyo and hailing Japan's economic reforms as an example for Europe:

Mr Snow, at the end of a two-day visit to Japan, said Tokyo had demonstrated that structural reforms could lead to stronger economic performance...

Mr Snow's comments on Japan's outlook were remarkably upbeat, following meetings with Sadakazu Tanigaki, finance minister, and business leaders. “I am delighted to see the pick-up in economic activity... I was encouraged to believe that good growth, good economic performance is going to continue,” he said, adding that the “bugaboo” of deflation should soon be laid to rest.

“One thing I have seen - of course beyond the numbers, which are telling a good story - is the confidence of government officials and confidence of private sector officials, that Japan is on the right course,” he said.

Mr Snow said he could not explain why this confidence had not persuaded Japanese investors to participate in the recent equity rally, which has been driven almost entirely by foreigners.

Who Eats, and Who Gets Eaten

Laurence Kotlikoff has a new paper: Will China Eat Our Lunch or Take Us to Dinner? – Simulating the Transition Paths of the U.S., EU, Japan, and China (together with Hans Fehr and Sabine Jokisch from the University of Wuerzburg). The paper develops a dynamic, life-cycle, general equilibrium model to study the interdependent demographic, fiscal, and economic transition paths of China, Japan, the U.S.,and the EU.

Regular readers of this blog will know that Kotlikoff et al have been developing an OLG -based model (Kotlikoff is one of the grandfathers of OLG) to examine the impact of asymmetric fertility changes on the OECD countries. This time they add China, and, well.......

"Adding China to the model further alters, indeed, dramatically alters, the model’s predictions. Even though China is aging rapidly, its saving behavior, growth rate, and fiscal policies are currently very different from those of developed countries. If successive cohorts of Chinese continue to save like current cohorts, if the Chinese government can restrain growth in expenditures, and if Chinese technology and education levels ultimately catch up with those of the West and Japan, the model’s long run looks much brighter. China eventually becomes the world’s saver and, thereby, the developed world’s savoir with respect to its long-run supply of capital and long-run general equilibrium prospects. And, rather than seeing the real wage per unit of human capital fall, the West and Japan see it rise by one fifth percent by 2030 and by three fifths by 2100. These wage increases are over and above those associated with technical progress, which we model as increasing the human capital endowments of successive cohorts".

So on this account it's China to the rescue, China saves the world.

I don't think they've quite got it, (I smell something fishy in the way they use 'effective labour' for a start, but there is more).

What I think we may need to do is to look at this endogenously: just what is the impact on saving of rapidly rising life expectancy coupled with only being able to have one child in the context of a high level of uncertainty over future pension entitlements?

Otoh I definitely think that there is a certain symmetry through artificial demographic shocks in both cases: in the US a demographic jump-start through immigration, and in China through administratively imposed low fertility. This is why the two of you seem to be so strapped together, and I do think it is worth *starting* the analysis with this point of departure.

Bottom line: I don't think the issue is as simple as Kotlikoff and co make it out to be. But the paper is definitely worth a read.
Posted by Edward Hugh at 12:46 PM