This week the 25th International Population Conference was held in Tours France. I have put up a number of related posts on Afoe - here, here, here.

I am now going to post a list of links here to papers which seem to me to be useful. They are primarily for my own reference, but maybe someone else will enjoy reading some of them.

In Russia, marriage remained early and universal over the 20th century. By the 1990s, mean age at first marriage was the same as in the second half of the 19th century. The traditional marriage pattern continued to persist despite the drastic political and economic changes that took place over the last 100 years since the collapse of the Russian Empire through the breakdown of the empire of the Soviet Union. Only did the Second World bring short-lived interruptions in age patterns of first marriage. In the mid-1990s, the age at first marriage began to increase, while the first birth is delayed. Cohabitation outside marriage develops intensively. Obviously, Russia is leaving the traditional marriage pattern for a new one. Two-three decades later than the western European countries, Russia is entering the Second Demographic Transition, and in the foreseeable future returning to the previous model of family formation is hardly possible.

Historians have posited that countries with youthful populations are more prone to war, but recent econometric studies of civil war have generally not found youth to be an important factor in conflict onset. This paper demonstrates that one likely reason for the contradictory evidence on youth and civil war is the poor conceptualization of the relationship between the two in prior research. A theory of the link between youth and conflict should involve Easterlin’s notion of relative cohort size (RCS). Using a logistic model of civil war onset worldwide, I find that, although several measures of youthful age structure are significant in the pooled cross-section analysis, first-differenced measures of youthful age structure involving RCS generally outperform other first-differenced measures of youth. The relationship between civil war onset and first-differenced RCS appears robust to a variety of controls. Hence a comprehensive understanding of civil wars would likely benefit from incorporating RCS.
Posted by Edward Hugh at 1:03 PM 1 comment:

What Kind Of Team Building?

This photo which appeared in the Times courtesy of Mirrorpix seems deeply symbolic with hindsight. London bombers Shehzad Tanweer, 22, circled front, and Mohammed Sidique Khan, 30, circled making a V sign, are photographed on a team-building exercise in Wales on June 4, a month before their suicide attacks. Also in the raft is Naveed Fiaz, 29, who is being questioned by bombing investigators, and a 32-year-old volunteer at an Islamic bookshop in Leeds. This is also in some ways reminiscent of how the 09/11 bombers used flight schools to train. The poor Welsh girl in the background obviously understands nothing, and is oblivious to it all. 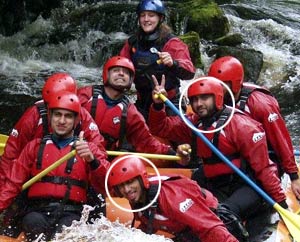 Incidentally, I am blogging vigourously all the recent developments on this over at A Fistful of Euros.
Posted by Edward Hugh at 3:23 PM 1 comment:

Obviously by now this isn't news. I posted a bit more yesterday on A Fistful of Euros. Andy Mukherjee has a good summary of the situation:

The first change in the yuan's exchange rate in a decade isn't going to cool the overheated Chinese economy, nor will it narrow the U.S. trade deficit, or satisfy New York Senator Charles Schumer who wants to slap punitive tariffs on China.

Thus, the diplomatic case and the economic rationale for a stronger yuan are as valid as they were before the revaluation.

Meanwhile, there's a crack in the door: Now that Beijing has gotten over its reluctance to give up the dollar anchor, it may find further revaluations politically easier to do.

The decision to manage the yuan against a Singapore-style currency basket shows that within China those who favor a market- oriented approach to macroeconomic management are gaining an upper hand in policymaking.
Posted by Edward Hugh at 12:43 PM No comments:

China Growth Continues To Be Strong

Why is this acceleration, contrary to expectations, taking place? Well Denise Yam and Andy Xie(both Morgan Stanley) suggest that:

"Strong opposition from interest groups (local governments, financial institutions, business sectors) held policymakers back from sufficient macro tightening to tame the investment-driven cycle in China. The objectives of social, economic and political stability leave the government with the arduous task balancing interests among economic sectors, geographical regions and between short- and long-term considerations. Strong growth is often preferred as job creation is seen as a powerful input to social stability."

They believe however that the investment-driven cycle will come under the pressure of its own weight - overcapacity, unfavorable pricing, reduced cash flow and shrinking margins and that "deteriorating profitability and corporate cash flow are set to force a slowdown in capex, bringing down the unsustainably strong economic growth". In this latter context this may be relevant:

A senior Chinese central bank official has said that commercial lenders should ensure that funds continued to flow to healthy companies amid signs of an easing of the country’s tight credit policies.....“Commercial banks should ensure lending of working capital to enterprises that are able to secure considerable market share, make money and create jobs,” said Zhang Xiaohui, the head of the monetary policy department of the People’s Bank of China, in an interview with the China Securities Journal.

This may well indicate that the corporate cash flow problem Xie so fears may be arriving.

Amazingly consumer inflation was only running at a 1.6% YoY in June, which with all the excesses of growth must mean underlying deflationary forces are strong. As Xie and Yam indicate in real terms retail demand grew by only 12% YoY, similar to the pace in 1Q05, and faster than that in 2004 (10%), and a reducing portion of GDP when you look at the fixed investment numbers in comparison.
Posted by Edward Hugh at 9:05 PM No comments: