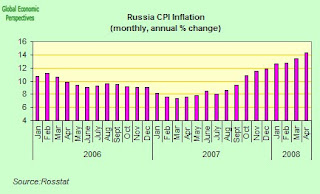 Russia, which is the world's biggest energy exporter, is struggling in what now appears to be a vain attempt to reduce the inflation rate to 10 percent this year as food and energy prices and rising wages and living standards take what appear to be a relentless toll. Russia's inflation rate reached 11.9 percent in 2007, topping the government's 8.5 percent target rate by a good margin.


As a result of the difficulties which the Russian government are having containing prices speculation is now mounting that one of the first policy decisions Dmitry Medvedev take after he's sworn in as Russia's new president this week will be to allow a stronger currency.


Merrill Lynch, Goldman Sachs and Deutsche Bank are forecasting the currency may rise by as much as 4 percent over the next six months. They suggest the central bank will come under increasing pressure to let the ruble appreciate to try to stem inflation even if it risks damping profits of oil and energy exporters, which according to Merrill Lynch currently fund more than half of the federal budget. The last time Bank Rossii allowed the ruble to strengthen was last August, when the inflation rate was "only" 8.5 percent. It's now up to 14.3 percent, and in all probability is still be rising.

The central bank attempts to "steer" the value of the ruble, setting the price against a currency basket made up of 0.55 dollars and 0.45 euros. It allowed the currency to appreciate against the basket three times last year, by a total of about 1.3 percent. The central bank also estimates the pass-through rate - or the rate at which and increase in the ruble would cut inflation - to be 0.3, that is to say a 1 percentage point increase in the ruble against the currency basket would cut inflation by 0.3 percentage points.

The downside of a stronger ruble for Rosneft is that it may diminish profit because half the oil produced by the company is sold into the dollar-denominated export market.

Interest rates aren't changes are thought not to as effective in controlling inflation in Russia as in more developed economies since Russia doesn't have a highly developed consumer-credit market, with mortgages and credit cards little-used outside larger cities, while the corporate sector has access to foreign currency denominated loans carrying lower interest rates which may not look especially risky given the background of potential ruble rises.

Many observers now fear that Russia is riding so high on rising oil and gas prices that it has little incentive to diversify economic activity beyond commodities. The energy industry produced more than two-thirds of the nation's export earnings and more than a third of the state's 2007 revenues, which totaled $315 billion.

The government has ignored advice from the World Bank and other organizations to invest in other industries, start-up companies and infrastructure. Instead, the central bank has amassed $530 billion in gold and foreign-currency reserves; Putin has put $130 billion of that in a sovereign-wealth fund that would provide no more than a two-year cushion if energy prices fall.

``This route may lead to a dead end,'' Economy Minister Elvira Nabiullina said at a Finance Ministry meeting last month. ``We no longer have the advantages of a cheap ruble, cheap labor'' after a decade of average annual economic growth of 7 percent that pushed up wages and the currency, making Russia less competitive.

Russia, the world's biggest energy exporter, has expanded an average of about 7 percent a year since President Vladimir Putin, 55, took office in 2000. During that time, the price of oil has risen almost fivefold to a record $119.93 a barrel. The economy will grow 6.6 percent this year, more than five times the 1.2 percent average of the G-7, according to Merrill Lynch.
Posted by Edward Hugh at 3:28 PM No comments: