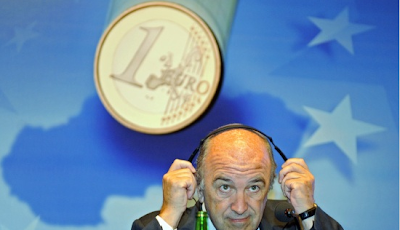 Now you don't need a PhD in economics to understand what follows, although a little bit of basic logic would help. What we have here could be construed as a kind of syllogism (and from now on let's christen this one "The Almunia Syllogism"). The Almunia Syllogism has the following form:

a) Anyone leaving (or aiding and abetting the departure of someone from) the Eurozone is crazy
b) The EU Commission, The ECB and The National Leaders are not crazy
c) Therefore no one will leave, or be allowed to leave, the eurozone (at least under current conditions)

Q.E.D. We Will Have A United States Of Europe.

Well, ok, I do need to add a lettle lemma here to the effect that the only way to enforce (c) is to build the necessary architecture, and there is room for debate about this, since this lemma is neither proven, nor is it self evident. You also need to accept that there is an excluded middle here, and we do not have a "now either the EU leaders are crazy ot they aren't" fork which we can get diverted down.

As I say, the lemma is not self evident, although my own opinion is that in the weeks and months to come its validity will become extraordinarily clear even to the most reticent among us, but this still needs to be established. The thing about the lemma is that it focuses the debate. Those who do not agree with it need to be able to show how we can have (c) within the present architecture (since here there is a middle to exclude, either we can or we can't). The results coming out from the "we can" camp are not entirely encouraging. For example, ECB Executive Board member Lorenzo Bini Smaghi's recent attempt to argue that Krugman has it wrong, and that (we can manage with what we have) fails stupendously to convince, in my opinion, and especially the extract I reproduce below (which exemplifies precisely the point those who want new achitecture are making).

For instance, for the period 2009-10, discretionary measures adopted in Germany total 3.5% of GDP, compared with 3.8%in the United States. In some European countries, such as Italy, the size of such stimulus measures is relatively limited owing to the high levels of debt, but in other countries the total fiscal stimulus is larger than in the United States.

The whole issue is that we need a mechanism to average out the stimulus, is that so hard to understand? Is this obscurantism, or simply stupidity?

A Literary Trope Not A Syllogism

On the other hand, the formal validity of the following "utterance" from Almunia is rather more questionable.

"Don't fear for this moment," he said. "We are equipped intellectually, politically and economically to face this crisis scenario. But by definition these kinds of things should not be explained in public."

The first phrase is an exhortation, one which I would agree with (but not for the same reasons), the second is an assertion whose truth content is, at least, questionable, while the third is an admission, one which would perhaps better not have been made, or a piece of advice, which the unfortunate Otto Bernhardt seems never to have received.

A senior German lawmaker said euro zone states stood ready to come to the aid of financially fragile members of the currency bloc, sparking furious denials from European leaders that a specific rescue plan existed. Otto Bernhardt, a leading lawmaker in Angela Merkel's Christian Democrats (CDU), told Reuters in an interview late on Thursday: "There is a plan."

and then Bloomberg let us know a bit more about the details of the plan.

The German Finance Ministry has no knowledge of a rescue fund organized by the European Central Bank for troubled euro-region members such as Ireland and Greece, spokeswoman Jeanette Schwamberger said.

Otto Bernhardt, finance spokesman for Chancellor Angela Merkel’s Christian Democratic Union, said in an interview with Reuters today that the ECB has a fund at its disposal to help troubled countries and can make money available at 24 hours’ notice.