When Will Year on Year Crude Oil Turn Negative?

When will year on year crude oil turn negative, and what will this mean for inflation? An interesting question this one. Last Friday NYMEX West Texas Intermediate Crude Oil for October delivery closed at $101.18 per barrel. 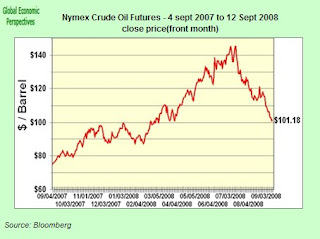 Light, sweet crude for October delivery fell $5.47 to settle at $95.71 a barrel on the New York Mercantile Exchange, after earlier dropping to $94.41, the lowest level since Feb. 14. This is oil's first settlement under $100 since March 4. Crude has fallen more than $50 — or 35 percent — from its all-time trading record of $147.27 reached July 11. So we are now hitting prices which were reached on the way up in the middle of February, but how long will it be before we are below the same price y-o-y. Then annual inflation rates will start to notice what is called the "high base effect", and it will be interesting to look at those countries where secondary effects have made their presence felt, and those where core inflation has basically remained low.

Well the decline continues today, and crude oil for October delivery fell as much as $4.15, or 4.3 percent, to $91.56 a barrel in Asian trading this morning. It was at $91.80 at 1:17 p.m. Singapore time on the New York Mercantile Exchange, the lowest intraday price since Feb. 11. Oil has declined 4.4 percent this year and dropped 38 percent from the record $147.27 a barrel reached on July 11. Obviously this is eventually going to be good news for some people and bad news for others, and then my guess is that we hit bottom and start to bounce back (see comment).

Oil rebounded again slightly this morning (Wednesday), and light, sweet crude for October delivery rose $2.80 to $93.95 a barrel in electronic trading on the New York Mercantile Exchange by noon in Europe. Overnight, the contract had fallen $4.56 to settle at $91.15, after dropping $5.47 on Monday. At one point yesterday oil touched $90.51 a barrel, its lowest since Feb. 8, and down 39 percent from a record $147.27 on July 11.

Well, oil prices shot up again on Friday, rising more than $6 a barrel on the day, and breaking back into $100 territory following the announcement of the US government financial rescue plan. Light, sweet crude for October delivery rose $6.67 to settle at $104.55 a barrel on the New York Mercantile Exchange, after earlier rising as high as $105.25. This was oil's first close above $100 in a week.

Crude has now climbed over $13 in three days, but prices will more than likely resume their downward trend in the very near future, since stabilising the global financial system (which is positive in the longer term) will so little to change short term macro economic dynamics. Availability of credit for consumers in the US and Europe will still remain tight as the mess is cleared up, and emerging markets are still keeping a tight hold on monetary policy to rein-in inflation, so demand for energy will likely continue to weaken as lacklustre growth in the global economy economy means supply will be more than adequate to satisfy short term needs. If there is a rebound in prices I would expect it after the spring of 2009.


After several days well above the $100 dollar a barrel mark oil prices started to fall back again today, reversing the yesterday's gains and on the back of growing frustration about the delays in US Congress approval of the massive financial bailout package. New York's main contract, light sweet crude for November delivery, fell 2.70 dollars to 105.32 dollars per barrel after hitting an intra-day low of 105 dollars.

Basically I still hold to the view that once all the dust settles on this complicated financial turmoil situation oil will be coming back down, although this point may now be reached later rather than sooner. The harsh reality is though, that even while oil stays high, a big chunk of the OECD world is sliding off into what may well become a rather protracted recession. At the same time, it is unlikely central banks will be able to ease monetary policy very far in the key emerging market economies while oil hovers around the $100 a barrel mark.

However just how tight the supply side situation is was emphasised again today by a report in the Financial Times which suggested that oil production losses caused by hurricanes Ike and Gustav in the energy-rich US Gulf of Mexico may be far greater than initially predicted, thus pushshing prices above the $100 (€68, £54) a barrel mark in the short term in spite of slower economic growth. Refineries have been particularly badly hit apparently, with a lack of power slowing their return to operation. The resulting output drop is forcing fuel distributors to draw down the US's gasoline stocks to their lowest level in 41 years to maintain supplies. Thus the bottom line is that there is little relief in sight for hard hit consumers, at least in the immediate future.
Posted by Edward Hugh at 6:41 PM 3 comments: