Mathew Lynn of Bloomberg has a reasonable run-around the UK housing situation. I agree with this "A sharp decline is now more likely. And a housing slump may well lead the economy into its first recession this decade".

The Economist is also fretting about housing (as it has been for some time now).

One other big difference between houses and shares is more cause for concern than comfort: people are much more likely to borrow to buy a house than to buy shares. In most countries, the recent surge in house prices has gone hand-in-hand with a much larger jump in household debt than in previous booms. Not only are new buyers taking out bigger mortgages, but existing owners have increased their mortgages to turn capital gains into cash which they can spend. As a result of such borrowing, housing booms tend to be more dangerous than stockmarket bubbles, and are often followed by periods of prolonged economic weakness. A study by the IMF found that output losses after house-price busts in rich countries have, on average, been twice as large as those after stockmarket crashes, and usually result in a recession. 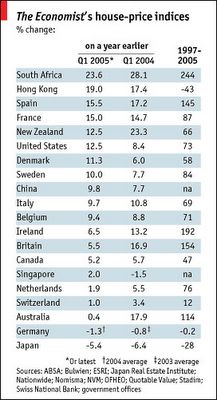 Apart from the fact that the boom in the Netherlands, the UK and Australia has now clearly broken, note the performance in key ageing economies like Germany and Japan, where property values have been falling for some time now, and Switzerland, where they are about to. One other surprising detail is Italy, where y-o-y is still at 9.7% despite the protracted recession. Just watch what happens when it follows the 'ageing' trajectory. (Spain will too, in my opinion, but that is out there in the future , and another story).
Posted by Edward Hugh at 11:11 AM 4 comments:

Copper On The Rise

Andy Xie was talking last week about a China driven oil price bust. I find the argument less and less convincing. China's growth rate may well slacken, but other important economies are also growing rapidly and could well take up some of the slack. Meanwhile commodity prices show no sign of imminent collapse:

Inventories monitored by the London Metal Exchange fell 600 metric tons to 33,900 tons, the exchange said yesterday. That's the lowest since July 1974 and equals less than one day of global consumption, forecast at 17.4 million tons this year by the Lisbon-based International Copper Study Group. Stockpiles have fallen 69 percent in the past 12 months.

``Low stockpiles are the main reason for the price rally,'' Gu Yuan, a metals trader with Shenzhen Star Futures Co., said by telephone from Shanghai."
Posted by Edward Hugh at 8:12 AM No comments:

Japan's Trade Surplus Is Going Down

This news is quite significant:

Japan’s trade surplus has fallen for the fourth time in five months, highlighting the weakness of exports and considerably higher import costs.

The surplus for May was down 68 per cent year on year at Y297bn, considerably less than market forecasts. The value of exports was up only 1.4 per cent on the year at Y4,796bn while the value of imports rose 19 per cent to Y4,499, boosted by high oil prices, the Ministry of Finance said on Wednesday.

The figures provide further evidence that Japan can no longer rely on external demand to keep its own economy growing. In particular, the value of exports to China declined by 0.1 per cent.
Posted by Edward Hugh at 7:51 AM No comments:

It hasn't been especially fashionable to talk a lot about Japan's fiscal difficulties of late. Probably a question of positive thinking. They do nonetheless continue to exist. The difficulty is, when you are still struggling to break the hold of a series of recessions which now go back over more than a decade, it's difficult to see how you can muster the energy to get the fiscal knife out. So obviously you wouldn't expect them to do it. And they aren't planning to. The brunt of Japan's new tax reform will consist of a battle against evasion, and to up the % of Japanese who pay tax. Meantime the FT article with this significant news does tell us that govt debt is now running at 160% of GDP - the last time I saw a number it was at 150%, but on this scale I suppose the odd 10% increase here and there is relatively small beer. Until, of course, the day it isn't.

Japan's tax commission on Tuesday proposed a radical overhaul of income tax as early as next year in an effort to repair what it considers the country's dire fiscal position.

With the fiscal deficit running at more than 5 per cent of gross domestic product before debt interest payments, the influential commission is proposing sweeping changes aimed at limiting avoidance and bringing more people into the tax net.

Hiromitsu Ishi, commission chairman, told the Financial Times that immediate improvement of tax collection was needed if Japan was to meet the challenge associated with a rapidly ageing society.
Posted by Edward Hugh at 7:41 AM No comments:

Now This Is The Point

"But what if China downshifts? Most economists foresee mainland growth slowing to a more sustainable 8.5% or so in the next couple of years. At the start of 2004, China appeared to be in real danger of overheating and contracting severely, which would have been a disaster, since the country needs to grow at least 7% annually to create enough jobs for new workers."

Get that, China needs a minimum of 7% growth just for the internal migration and demographics. The US, according to Krugman, needs a 3% minimum growth for the same reason (as I write this I have just realised that Spain isn't growing quickly enough at 2.7% when you consider the huge inward migration 1.5% of toatal population annually. This means that per capita incomes are rising as the % of people of working age is rising, but that *productivity* is falling, since the economy isn't growing as quickly as the labour force, and this is what the OECD and IMF studies show. That's an example of 'demographics' in action: quick, clean and efficient as a 'rule of thumb' analysis).


"We are entering a war of attrition, there will be continued overcapacity," says Automotive Resources President Michael J. Dunne "Whoever has the deepest pockets will survive this battle of wills."
Posted by Edward Hugh at 8:29 AM No comments:

Latest figures on fixed asset formation show that the 'growth explosion' seems to still have plenty of life left in it:

"China's fixed-asset investment picked up for a third straight month in May as more power plants and railways were built to reduce blackouts and ease transportation bottlenecks in the world's fastest-growing major economy.

Investment in urban areas rose 26.4 percent from a year earlier to 1.97 trillion yuan ($238 billion) in the first five months, the Beijing-based statistics bureau said on its Web site. The increase is the biggest this year and follows a 25.7 percent gain for the first four months".
Posted by Edward Hugh at 8:21 AM No comments: