Nicholas Negroponte, tech visionary, former Director of MITs media lab and founder of the One Laptop Per Child nonprofit association hit back yesterday at the silly negative comments his project has been receiving from the tech elite in the shape of people like Bill Gates and Intel:

"Kicking off the LinuxWorld conference in Boston, Nicholas Negroponte said he was undeterred by skepticism from two of the leading forces in computing, Intel Corp. and Microsoft Corp. "When you have both Intel and Microsoft on your case, you know you're doing something right," Negroponte said, prompting applause from the audience of several hundred open-source software devotees."

I'm with Negroponte 100% of the way here (as I've been saying in this post and this one). I think this type of device is what we really need to seriously start levelling that playing field (and, of course, if anyone can come up with something better for the same price, then please feel free to go ahead). I also think Negroponte may be a lot nearer the way mass computing may move than many suspect. Of course there are commercial uses and geeky individuals who will always look for something more sophistocated, but that 'other population' the one which currently prefers the mobile phone to the pc, they are more likely, IMHO, to be won over into the internet by something which is no frills, cheap, and easy to use.
Posted by Edward Hugh at 8:05 AM

It's An Insects Life 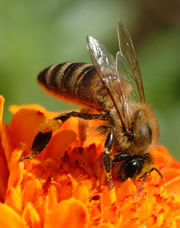 Well insects certainly seemed to have been vastly undervalued in the past. According to a piece of research by conservationists Mace Vaughan and John Losey (published today in the Journal BioScience, you can find another summary here) insects contribute an impressive $57 billion to the US economy every year even on a fairly conservative estimate. And be careful, according to our authors, conservative here certainly does mean conservative, since:

Excluded from the analysis were the services provided by domestically reared insects such as honeybees. "If you look at all of the services across the board, you're looking at hundreds of billions of dollars," Vaughan says.

Of course it's hard to know exactly what importance can be attached to such numbers, but I think the bigger point they are making is certainly a valid one: our economic system works the way it does because it is embedded in a much more extensive network of systems, including the bio-diversity one these authors seek to draw our attention to.
Posted by Edward Hugh at 2:21 PM

Well, things certainly have been moving quite quickly in Japan recently. The recovery seems to have just started to gain some traction, and now we are being told that internal capacity limits may be being reached due to the presence oF labour shortages:

"Japan’s large manufacturers are short of capacity for the first time since the bubble era of the early 1990s, while employers across the country also face the worst staff shortages since around that time, according to the Bank of Japan’s Tankan survey."

This should really hardly be surprising, since with a stagnant and ageing population I am not sure where people imagined all the extra labour that was needed to sustain the recovery was going to come from.

The survey’s capacity index for large manufacturers - a measure of whether they have enough plant - swung from plus 2 in December 2005 to minus 1 in Monday’s March survey. This was the first negative figure since 1991. The Bank subtracts the percentage of companies complaining of insufficient capacity from the percentage reporting excessive capacity.

The survey’s economy-wide employment index - excessive employment minus insufficient employment - fell three points to a 14-year low of minus 7.

Signs of labour shortages tally with government employment figures announced on Friday, which showed a fall in the unemployment rate to an eight-year low, and a rise in the jobs-to-applicants rate to a 14-year high.

This labour market tightening would seem to have three logical outcomes.


Firtsly a growing inflationary pressure inside Japan (viz the FTs comment that "The gaps ......strengthen the case among the hawks at the central bank who want to end the BoJ’s zero interest rate policy as soon as possible to forestall inflation).

Secondly, a growing pressure on the trade balance from the increasing introduction of more competitively priced imports.

Thirdly, and outsourcing drive in search of more abundant labour (or lets move to China):

Japanese companies are turning to China as a manufacturing base to benefit from low labour costs, but are also relying increasingly on the burgeoning Chinese consumer market as a destination for exports as well as goods produced in China.

Japan’s economic recovery is still largely export-based and continued Chinese buying is acknowledged by policy-makers as a key component in ensuring the recovery is sustainable, despite occasional political tensions.
Posted by Edward Hugh at 1:49 PM

Much Ado About Immigration

Well the economics blogs are full of talk about immigration and the US economy at the moment.The thing which seems to have kicked it all off is this piece in the NYT from Paul Krugman. It's behind the subscription firewall, but Brad Delong has a substantial extract:

"I'm instinctively, emotionally pro-immigration. But......the net benefits to the U.S. economy from immigration, aside from the large gains to the immigrants themselves, are small. Realistic estimates suggest that immigration since 1980 has raised the total income of native-born Americans by no more than a fraction of 1 percent...... while immigration may have raised overall income slightly, many of the worst-off native-born Americans are hurt by immigration -- especially immigration from Mexico.... George Borjas and Lawrence Katz... estimate that U.S. high school dropouts would earn as much as 8 percent more if it weren't for Mexican immigration......Realistically, we'll need to reduce the inflow of low-skill immigrants."

Here we can deduce two things:

This last point is not meant ironically, since we should remember here that according to the Pew Hispanic centre, illegal migration into the US peaked in 2001, with the ending of the Nasdaq boom. Since that time it has been reducing, and to put things in perspective, is currently on about the same level as inward irregular migration into Spain.


"The number of migrants coming to the United States each year, legally and illegally, grew very rapidly starting in the mid-1990s, hit a peak at the end of the decade, and then declined substantially after 2001. By 2004, the annual inflow of foreign-born persons was down 24% from its all-time high in 2000"

Essentially I do not accept the Borjas thesis (he has been going on about this for years) that unskilled in-migration is a negative factor (indeed I doubt that it is wage differentials - this is essentially the Borjas thesis - rather than the availability of employment per se and the presence of networks, which actually drives migration). Some of my reasoning can be found here, and some here. Essentially what is at issue in this case isn't the state of the US labour market, but deficiencies in the way the US social model works. If such large numbers of people are unable to climb the social ladder and attain minimal educational levels something must be failing somewhere (Greenspan has been highlighting this for years), and the responsiblility for this doesn't lie with the incoming migrants. Really the US is not producing enough highly qualified people - and is dependent on migration to fill part of these needs too - and this is the real issue.

Brad Delong basically concludes that Krugman is "confused and very probably wrong". I couldn't say whether he is confused, but I am sure he is wrong. I absolutely agree with Brad when he says that "The net benefits from immigration including the large gains to the immigrants themselves are enormous. We shouldn't forget that" but I would go further.

I think the collective benefits for the US which come from immigration are much bigger than is being suggested by Borjas and Katz (and than is being bought by Krugman)..... Of course justifying this statement will need a much longer post (and more thought) from me. An earlier first pass can be found here. Right now I am working on a series of posts for Demography Matters on the closely related topic of US fertility and US economic growth, and some of the conclusions I am coming to there are more than a little relevant here.

In the meantime there is plenty of interesting posting going on, EconPundit has a very interesting point here, Kash at Angry Bear has posted here, and Maxspeak here, and Tyler Cowan at marginal revolution here.
Posted by Edward Hugh at 12:10 PM