The Economy Watchers index, which is a gauge of Japanese domestic demand based on a survey of workers who deal with consumers, fell for a sixth consecutive month in September, to 42.9, down from 44.1 in August, according to the Japanese Cabinet Office in Tokyo today (Japanese only). A number less than 50 means pessimists outnumber optimists. 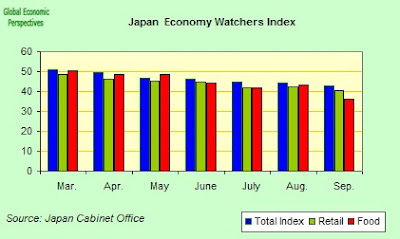 Today's report, which is the first piece of consumer-related data we have for September, suggests Japanese consumer spending may may fail to support growth should exports cool as a result of the global slowdown. Sentiment among consumers, whose spending accounts for more than half of gross domestic product, has been battered by sliding pay, a tax increase and the government's loss of pension records.

As we can see, in the sub indexes sentiment among retailers fell 2.2 points to 40.4 - its lowest level in four years, while confidence at food-related businesses tumbled 7 points to 36.3, the worst since February 2003.

Wages have dropped in seven of eight months this year and have fallen around 10 percent in the past decade. Pay rose 0.1 percent in August, but this is in part explained by workers putting in overtime hours to make up for a production slump caused by an earthquake in the previous month.

Consumer confidence dropped in August to its lowest level in almost three years and stocks also had a downward correction. A withdrawal of tax rebates in June and the government's admission in May that it lost pension records may also be taking a toll on sentiment.

Today's survey showed shopkeepers expect spending to slow in the next two to three months, while the outlook index fell to 46 in September from 46.5 in August.

Sentiment indexes are often hard to read, and need to be thought about in junction with other "real" economic data. But when we put these results, which really do seem to be fairly clear, together with what we already know about weak Japanese earnings (despite the apparently tight Japanese labour market), weak consumption, and the export dependence of the Japanese economy, all the data does seem to be pointing in the same direction: as I suggest here (and see also Claus here), the danger of a recession in Japan is now real and strong.
Posted by Edward Hugh at 8:55 AM