EU Ministers and the Czech Deficit

Well, I can't help thinking some people have an obsession with fiscal deficits at the moment, I really can't. EU finance and economy ministers, meeting yesterday in Luxembourg, took it upon themselves to criticise the Czech government for their fiscal policy telling them in the process that they must "take effective steps" to cut their budget deficit to bring it into line with European Union rules, and that they must do this no later than next year. In fact they have given the Czech Cabinet until April 9, 2008 to take measures to ensure that next year's fiscal deficit, adjusted for one-time factors, falls below the EU limit of 3 percent of gross domestic product. At the present time the Czech government government projects a fiscal deficit of 3.6 percent of GDP this year, compared with an initial 4 percent target.

Now in the face of ageing societies I am all for structural reforms and fiscal rigour I really am, but I think there is a time and a place for everything, and a sense of proportion is needed here. The Czech economy is, as I tried to have illustrate yesterday, one of the few real relative success stories to be found among the EU 10, and as such there is a real need for balance and for classifying issues in terms of their importance here. (This stance on the Czech Republic seems to parallel recent exchanges over the level pf the current French deficit between Trichet and Sarkozy, exchanges which seem truly out of proportion when you consider the extent of the accumulated debt problem which exists in say Italy or Greece, and well, I would make a similar point about how the Czech Republic. "Overheating", while still an issue, is far less problematic in Czechia than it is in many members of the EU10, and this "detail" would be my personal initial point of departure for assessing the robustness of the Czech economy, and the margin for manoevre the government may or may not have in terms of fiscal deficits).

The Problem Facing the EU10

3/. Loss of control over domestic monetary policy due to eurozone convergence processes which - with or without the presence of formal pegs - make gradual downward adjustment in currency values as a alternative to strong wage deflation virtually impossible. This issue is compounded by the likely private "balance sheet consequences" of any sustained downward movement in the domestic currency given the widespread use of mortgages which are not denominated in the local currency.

Now the worrying part about all three of these is that they are not simply cyclical in character. As such they are not problems which will "self correct" as a result of a recessionary slowdown, whether this be of the "soft-" or "hard-landing" variety. This problem simply is not being taken into account in many of the current pronouncements on the EU10, and certainly is in no way reflected in the current "deficit obsession" which we can see at EU Commission level.


The current controversy has its roots in a decision by the Czech government last September to push through Parliament a set of tax changes and spending cuts that are intended to narrow the fiscal shortfall to 3.2 percent of GDP next year and 2.8 percent of GDP in 2009, an outcome that the Czech finance ministers consider to be "plausible'' in spite of the "considerable uncertainties'' which are linked to the tax overhaul.

The controversy has of course been well served by a 17 percent jump in welfare spending approved before elections last year, and these have, of course, boosted spending even as a record 6.4 percent pace of economic growth in 2006 brought in more tax revenue than expected. The economy is expected to expand 5.9 percent this year, according to the Finance Ministry forecast in the 2008 draft budget.

``In the absence of measures to address the budgetary impact of aging, the debt ratio is likely to increase significantly over the next decades'' from about 30 percent of GDP now, EU finance ministers said, in their statement. I agree completely, but are we not in danger of confusing two issues here, longer term structural issues, and short term budgetary ones?

Certainly, when compared even with many existing eurozone members, the Czech deficit problems can hardly be said to be of the "basket case" variety: 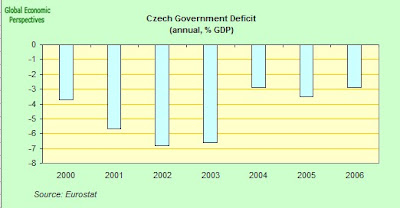 And as the EU finance ministers accept, the debt to GDP ratio - which is currently around 30% - is hardly huge in comparison with some others I could mention. 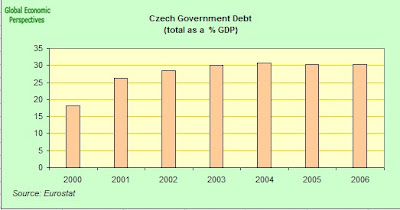 So the issue here is the need for longer term structural changes - just like in France - and the best way to achieve this may be by presenting the necessary laws and longer term reforms, and not by focusing on short term deficit issues. As I have indicated, there are far more pressing issues on the table all over the place at the present time.

And even when we come to the external balance position, the Czech position is far from being a chronic one. Trade in goods and services is now in balance: 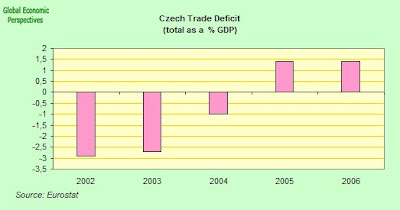 And even the CA deficit, which does need addressing, is not large in comparison with many of the rest in the EU10. 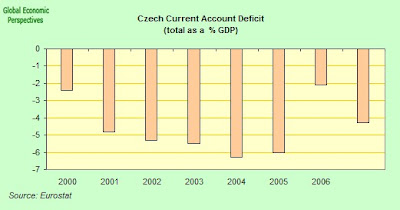 Finally, and as an example of a more balanced view I would draw attention to the fact that the most recent IMF staff report on the Czech Republic had this to say:

Lingering slack in the labor market has helped contain wage inflation. Despite strengthening demand for labor, suggested by rising vacancies, wage pressures have remained subdued, as rising inflows of immigrant workers have helped offset the impact of population aging on labor supply. Recent employment gains have been concentrated in industry and private services, including real estate, and do not yet appear broad-based. Unemployment has fallen, but remains around 7 percent, as continued geographical and skill mismatches have kept structural unemployment high.

The main concerns center on the erosion of fiscal discipline in 2006-7 and the medium-term fiscal outlook. The expansionary fiscal stance for 2007 is out of place in view of the expected robust growth. The authorities’ medium-term consolidation plans are appropriate, but supporting measures should be identified without delay. A cutback in high mandatory social spending would improve fiscal flexibility and efficiency. The institutional fiscal framework also needs to be strengthened.

Well exactly. So let's just try and keep things in proportion, shall we?
Posted by Edward Hugh at 11:17 AM