Well despite the fact that someone claims they have not enough data to make a judgement, evidence continues to mount of a slowdown in the eurozone and particularly in the key German economy. So, for those of you with a strong stomach, here is a bit more. First off, new factory orders in Germany, where manufacturing orders rose less than many economists had forecast in August after the euro's gains seem to be making exports less competitive while domestic spending follows its now traditional flat pattern..

Orders, adjusted for seasonal swings and inflation, rose 1.2 percent from July, when they dropped 6.1 percent, the Economy and Technology Ministry announced at the end of last week, based on data from the Bundesbank. The July decline, which was revised up from a 7.1 percent drop, was still the largest since at least September 1991. Particularly striking was the 10% drop in foreign orders noted in July over June. 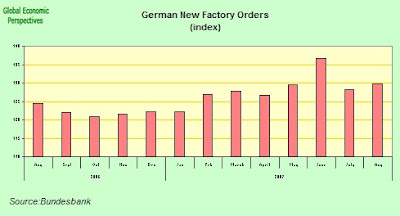 As can be seen the level of orders has fallen back considerably from the, admittedly, very high level achieved in June.

If we now look at the construction PMI we can see a similar picture: 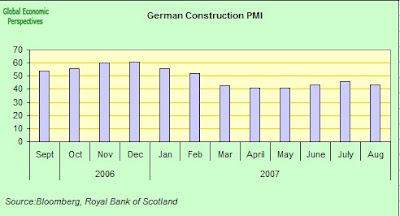 As can be seen, given that 50 is the dividing line between contraction and expansion, construction has been in contraction since February.

If we now take a quick glance at the manufacturing PMI: 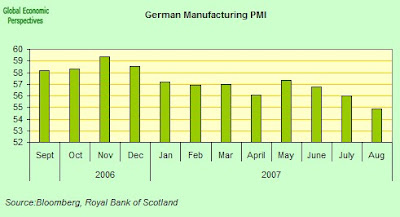 We will see that while the German manufacturing sector is still expanding, the rate of expansion has been slowing steadily since the spring. I would say all the pointers are now there to show that a rapid slowdown is taking place in the German economy.
Posted by Edward Hugh at 11:40 AM