Where is He? The Mysterious Dissapearance of Jean Claude Trichet 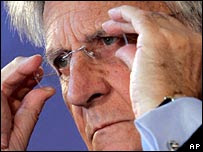 Well this is a rather frivolous post about a fairly serious issue. Has anyone seen Trichet? (No, not Kelly, Trichet). I imagine the financial markets would like to know what he thinks. Or rather, maybe they wouldn't, but they need to.

Basically this isn't a case of quietly fiddling while Rome burns (and this) but it damn nearly is (burning I mean, or was that Paris), and the Reichstags won't be far behind. Meantime hardly a flat or house is being sold in Spain.

So with all eyes focused on US data while the eurozone economy is visibly tanking, or rather wilting by the day, where the hell is Trichet? Hasn't anyone else noticed how he has suddenly gone missing? Strong vigilence is obviously over, but when the hell is he going to start explaining that he might have to lower interest rates, and when he finally does this how will the financial market activists respond? I mean some of them seem to have very little idea about what is actually going on at the moment. Over at DailyFx, for example, they seem to be under the impression that the eurozone is a country or something:

"As an export dependent nation, the Eurozone has a lot to lose if the Euro continues to rise."

I think they meant Germany there, since France certainly isn't dependent on exports, and Spain has a whopping trade and CA deficit which puts the US one really in the shade.

Actually the general tone of what the DailyFx analyst has to say isn't so far from the mark:

The Euro made a new record high today despite larger than expected drops in German business confidence and import prices. Economic data out of Europe continues to get worse and if the Euro does not stop rising, the European Central Bank will be forced to verbally intervene in the currency. Don’t forget that the Euro topped out in late 2004 after Trichet called the moves brutal and he may have to do so again as German business fell to a 19 month low in September. This is a result of deteriorating credit conditions, a strengthening currency and tight monetary policy. As an export dependent nation, the Eurozone has a lot to lose if the Euro continues to rise. The only major benefit of a strengthening currency is lower inflationary pressures. We are already seeing the initial impact with import prices falling for the first time in nearly 2.5 years. Less inflationary pressure means less pressure on the ECB to raise interest rates. If we see a material slowdown in economic data, softer inflation may actually give the central bank the flexibility it needs to begin talking about lowering interest rates.

So this is the point. We are soon going to be into declining rates at the ECB, and then what is going to happen to euro/dollar. I ask you? Are the markets ready for this?

Even ECB-adviser and hawk Joaquim Fels now has the current ECB rate as neutral, and of course, if the fundamentals are deteriorating, neutral quickly becomes "overtight". No wonder Trichet is hard to find at the moment.

If you are looking for more serious analysis of all this, Claus Vistesen has some over at Alpha Sources.

As for Trichet, after a long search I have finally located him, he has been in Holland, talking about the importance of demography for Europe's future. Obviously he is rather more focused on the longer term right now. I can well understand why.
Posted by Edward Hugh at 9:13 AM