Employment and Unemployment in Germany

German unemployment fell for the 19th consecutive month in August according to figures released by the Nuremberg-based German Labor Agency earlier last week. The number of people out of work in Germany when adjusted for seasonal swings, declined 15,000 from July and hit the new recent low of 3.76 million.

Now, this seems like very good news indeed, doesn't. And of course it is. But is there more than just good news here? Perhaps there is, since, as we know, after 30 or so years of sub-replacement fertility the German population is now falling, so what about the labour force? Well maybe the first clue that all here isn't exactly as it should be can be found in this little admission tucked away in the press release from the German Federal Statistics Office:

Another positive impact on the labour market is exerted by a decrease in labour supply which, according to estimations of the Institute for Employment Research, will decline by 100 000 on an annual average in 2007.

Now fortunately the Federal Labour agency makes available monthly detailed statistics for the evolution of the German labour force, and it is to an analysis of this data that we will now turn.

Firstly the unemployment rate itself. Now there are various measures of this rate which you will find in current use, but whichever you look at it is plain that unemployment has been steadily coming down during the present expansion. In the chart below we illustrate this with the measure used by the Federal Labour Agency: 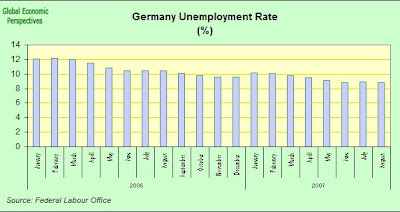 Now, if we come to look at the chart for the total numbers of those employed and unemployed (not seasonally adjusted) we can begin to notice some interesting details: 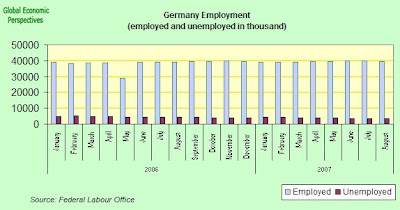 In the first place and clearly the number of unemployed has come steadily down. And the number of those employed has risen, although this is not such a clear picture, since the recent rise has only recovered the employment high-point which was achieved at the end of last year. 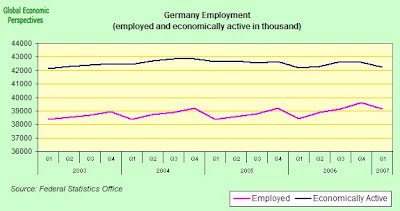 This is, of course, good news, if you work for the German Labour office (what is it they say - "Another positive impact on the labour market") and it is your job to find work for people since you will have less customers and hence less work to do, but it certainly isn't good news if your job is to generate a smoothly oiled economic machine capable of generating sufficient wealth to be able to sustain and support and adequate health and pensions system for all those members of that rapidly expanding over 65 age group. Also, and again as we can clearly see, the "massive job creation miracle" may have touched its ceiling sometime towards the end of last year. The German economy is now slowing, and it is not impossible that German employment will never again reach those giddy heights.

But there is another detail which should interest us here, and that is the type and quality of the work which is being created. Lets take a look at the data from the German Federal Labour Agency for those in work which is liable for the payment of social security contributions: 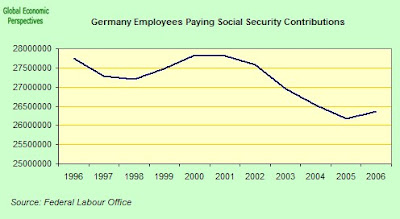 what we can see here is that the numbers of people in jobs which are liable to such payments reached a peak in 2001/02 and that subsequently it was declining up to the end of 2005. If we now take a look at a monthly chart since the start of 2006 we will get a clearer picture of the more recent situation: 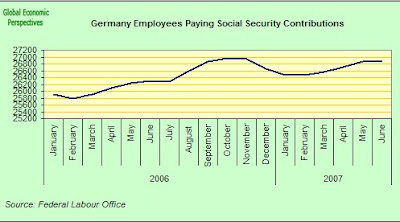 I was in fact put on the track of all of this by an article a couple of months back in the Economist. They make the point in that article that Zeitarbeit, as temporary work is called in Germany, may only account for 1% of total jobs, but it does at the same time account for more than half of all those new jobs created in Germany the past year.

One example of the new breed of employers is time & more, which specialises in health care. It has around 400 people on its books, of whom 300 are nurses; two years ago it had 250. Its founder, Bernd Sydow, who sold his firm to Adecco in April, says that it supplies almost all Berlin's hospitals as well as hospitals in other big cities. Around three-fifths of time & more's nurses are called on for stints of one to three days, often at short notice. Having reduced permanent staffing levels and carrying no reserves, hospitals turn to the agency as their requirements fluctuate. Mr Sydow reckons that eventually about 5% of his clients' nurses will come from an external pool."

Now why is all this interesting. Well for two principal reasons. Firstly because of the most striking similarity with what has been happening in Japan (that other global leader in population ageing), and secondly for the light which all of this may throw on the evolution of domestic consumption in Germany. Basically the German jobs machine has been generating a large number of non-traditional and part time jobs, and these jobs are nothing like as remunerative as the traditional ones they have been replacing. There is nothing strange or even surprising in this, as Germany's workforce is ageing, and many of those in the over 50 age group who are seeking work may well find themselves working in just this sector.

As I say, the similarities with what has been happening in Japan are very striking here, and I do, of course, have a Japan blog, and you can find some of my arguments about what is happening to internal consumption, wages and the labour market in Japan on that blog.

Now, if we turn to the impact of all of this on German wages and salaries, then we will find that, naturally enough, and under the circumstances, they have not been rising anything like as fast as some imagined they would be, given the supposed "tightening" which was taking place in the labour market.

As we can see, the response of German wages and salaries to the "new economic revival" has been extremely muted, and this should not surprise us in the least if we think about the changing age composition of the German Workforce.
Posted by Edward Hugh at 12:05 PM

Edward,
Could you clarify what type of jobs would be classified as "work which is liable for the payment of social security contributions"? Are part-time jobs in Germany excluded from such contributions? That would be surprising to me.

Also, I am looking at estimates that as of this year 19% of the German population is 65 or older, and Germany's net natural population growth is a negative 2 persons per thousand. So that decrease in labor supply which you point out is likely due in some degree to mortality.

Those Germans that have left the labor force due to retirement might be expected to provide somewhat of a positive push to consumption, as they will no longer be putting pay into savings but will be spending down that savings. However, such retirees are probably going to be cautious as they obviously don't want to run out of money before they pass away.