Well the FTs Frank Atkins may be going a bit far in make comparisons with the aftermath of 09/11, but the fact of the matter is that there does seem to be a significant slowdown in progress.

The eurozone economy has this month suffered its biggest jolt since the aftermath of the September 2001 terrorist attacks, with global financial turmoil hitting the services sector particularly hard, according to a closely watched survey.

The unexpectedly steep fall on Friday in the eurozone purchasing managers’ index – the third consecutive monthly drop – could knock policymakers’ previous confidence that the 13-country eurozone economy would escape largely unscathed from the US subprime mortgage crisis.

Here is the chart for the Bank of Scotland PMI for the last few months: 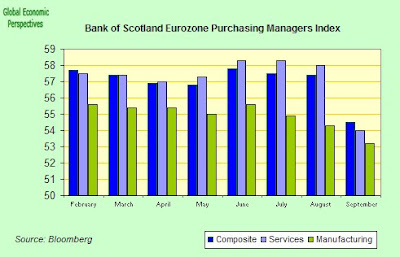 Manufacturing seems to have peaked out in mid summer, but services do seem to have started to screech towards a halt (in the sense that 50 marks the neutral, non-expansionary, reading) since mid-August. This would be consistent with other reading we have in the sense that Germany and Italy have been slowing prior to the sub-prime issue, but now - from everything I can see around me here in Barcelona - the construction component of the key Spanish economy is also rapidly grinding to a halt. The reason is obvious I think : banks simply aren't so ready to lend money, and certainly not such a large proportion of the asking price as has been the case hitherto. Conclusion: young people will now have to start to save, and this saving will be noticed in Spanish consumption. And it won't be a one day wonder. Spain will be living with the aftermath of the boom for some years, I think.
Posted by Edward Hugh at 10:29 AM