Well following hot on the heel of my German export driven economy post yesterday, events didn't take too long in bringing themselves home to roost.

Firstly we have the IFO Business Climate Index: 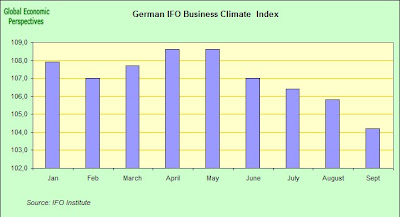 The index for the Munich-based Ifo institute which is normally though to act as an early indicator of likely trends in German economic activity, fell for the fourth consecutive month from 105.8 in August to 104.2 for September. Expectations for the next six months were the gloomiest for almost two years, as the component measuring confidence in the economic outlook six months from now fell to 98.7, which was the lowest level recorded since November 2005, and down from 100.4 in August. Indeed this months general business climate reading was itself a 19-month low, and reflected growing concerns among German industrialists that the strength of the euro and the increasing cost of credit will sap economic growth. The IFO results are entirely in harmony with the Bank of Scotland PMI readings we saw earlier in the week and the ZEW institute reading last week.

German consumer confidence also fell - in this case to the lowest level in five months - according to the GfK AG's confidence index for October. The index fell to 6.8 from 7.4 in September, the market-research company said in Nuremberg today. 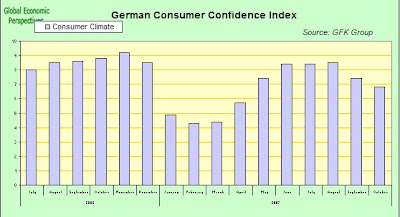 The general concern is the same as that being expressed in the IFO index, the fear that Germany's economy may lose momentum as a U.S. housing slump pushes up borrowing costs and at the same time the euro's appreciation to a record against the dollar weighs on exports.

The individual components of the index also make interesting reading: 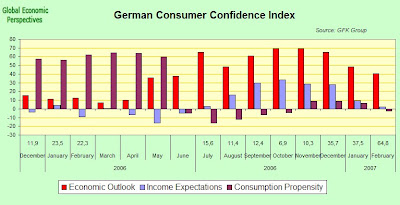 The component measuring consumers' confidence in the economic outlook fell to 40.7 from 48.4, while the income expectations component dropped to 2.3 from 9.2 and the indicator of households' willingness to spend slipped to minus 2.4 from 6.4. These are quite substantial drops, and reflect a growing pessimism about the outlook for the coming winter.

In this climate it is hard to appreciate why people imagine that the dollar can quietly pulmb the bottoms while the euro scratches the ceiling. A correction is undoubtedly coming here, since the current narrative makes no sense at all. The first indication of the change, well haven't you noticed, M Jean-Claude Trichet has gone very quiet all of a sudden. Somehow I don't think he relishes courting the limelight too much right now.
Posted by Edward Hugh at 3:03 PM