This is the first of a series of posts which will try to get to grips with the state of the global economy in the wake of the recent liquidity turbulence.

The Story So Far


As indicated in this post, the big danger we face at the present time is that the current liquidity crunch converts itself into a credit crunch. This may or may not happen. For it to happen there needs to be a pretty systematic ongoing process of interaction between the financial markets and the real economy in such a way that the negative components of each of them reinforce each other. As far as the global economy goes, there are a number of key sectors to keep an eye on: the US, China, India, Germany, Japan, Italy and Eastern Europe. Eastern Europe is especially important, not for its magnitude, but for its growth rate, and its significance in the recent expansion of high risk new credit.

And the US? In many ways the US could tip the balance one way or the other. So watching how things play out in the US in the coming weeks and months can prove to be critical.

One of the issues at the moment is that the financial markets are a bit adrift due to the lack of real data, so what little news there is is rapidly pounced on.

Today we have two pieces of "news" from the US. The UBS investor optimism index, which you can see below. 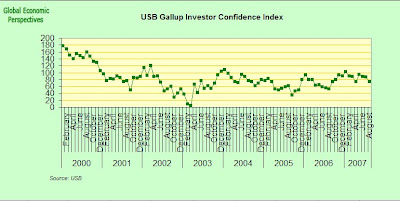 Obviously the index has been trending down slightly of late, but it is hard to read any deep significance into this, since it has been moving up and down quite vigourously throughout the present business cycle.

The other piece of data we have to say is the existing homes sales index for July from the US National Association of Realtors. 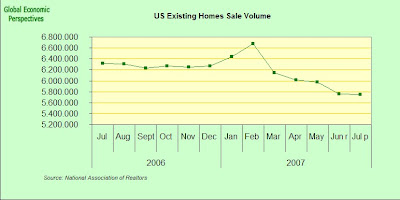 Now clearly the volume of sales has dropped off considerably, about 9%, as compared with a year ago. And this does mean that the rate of turnover in the market is low. But if we look at the prices index (see below) then - at least nationally - the price decline situation is far from dramatic. I would expect to see a lot worse in some of the most vulnerable European economies (Spain, Ireland, Greece) if the liquidity crunch really does turn into a credit crunch. At the present time all we can say is that this outcome represents a possibility, but it is still certainly by no means an inevitable eventuality.

However, as DailyFXnote, this data is now to a certain extent history:

In the US today the markets will get a look at the Existing Home Sales data with consensus call forecasting a small contraction from the month prior. The data is for July and therefore may be a dated in its value as the recent market turmoil has made credit far more difficult and costly to obtain which will likely have a much more depressive effect on home sales as we move into the fall season. The median house price data is expected to fall this year for the first time since federal housing agencies began keeping statistics in 1950 indicating the sharpness of the decline.

Essentially there is anecdotal evidence all over the place that people have started to find it much more difficult to obtain mortgages, even people who are in no way "sub-prime", so it is hard to believe that existing home sales in August won't be well down, which is just one of the reasons why Bernanke may be seriously considering a rate reduction in September, and one of the reasons why Jean Claude Trichet may be having second thoughts, since some Eurozone economies will be very sensitive to any credit conditions tightening. This is going to be a very hard call for them all. 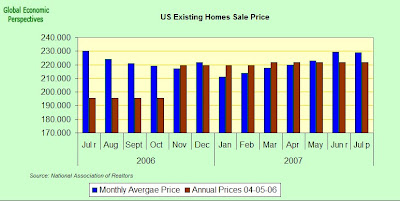 Now this chart needs a bit of explanation, since I have done a bit of simple improvisation. The bars in brown represent average prices for 2004, 2005 and 2006 respectively. I have put them alongside the monthly time series for 2006 and 2007 (the blue bars)just so people can get an idea of the orders of magnitude involved, and of the size of the "correction" - at least to date. Of course, the big outstanding question is whether the slowdown in turnover will eventually translate itself over into a more substantial price reduction. I would say that that is really the big outstanding "what if" question at this point in the US business cycle, and why I think it is possible that things can move one way or another, depending really on the conditions under which US banks are prepared to lend money to first time buyers.

Obviously there is a correction going on, but to date it is hardly a dramatic one. There are still plenty of sales, and prices are not falling dramatically. Clearly there are a lot of delinquencies in a relatively small part of the US market, but does this have to bring the whole global credit industry to a halt? I find that hard to believe.

Obviously people are nervous for a whole variety of reasons, and this nervousness is currently focusing on the US most risky mortgages sector. But these people also represent some sort of version of "moral hazard", since they know that Bernanke will ultimately bail them out, don't they? Isn't that what all the shouting is about. Ouch, it hurts! Please help me.

That all of these cries of pain come from people who supposedly believe in market economies really does make me laugh.

Actually, the whole situation does make me think about how the business cycle is 90% psychological, and about how right Keynes was to talk about animal spirits.

Basically, I think the key market participants are bi-polar, and once they get in a gloomy state then on comes the recession. Obviously there are underlying fundamentals that play a part like this housing correction, but, come on, you could legalise 11 million Latinos tomorrow, and sell them a lot of houses, if this was the only problem. It appears other issues also play their part here. I mean, if they were all legal and regular, a lot of these people would stop being sub-prime, wouldn't they? So why aren't they, and why are some people busily trying to use taxpayers money to build a wall between the US and Latin America? Where is the underlying economic rationale here?
Posted by Edward Hugh at 6:16 PM