Well, as they say, you should always take a quick glance at the charts that lie behind the news. So let's do this with today's AP story on the drop in US house prices. Here's the story as published:

U.S. home prices fell 3.2 percent in the second quarter, the steepest rate of decline since Standard & Poor's began its nationwide housing index in 1987, the group said Tuesday. The decline in home prices around the nation shows no evidence of a market recovery anytime soon. MacroMarkets LLC Chief Economist Robert Shiller said the declining residential real estate market "shows no signs of slowing down." The index tracks the price trends among existing single-family homes across the nation compared with a year earlier .A separate S&P/Case-Shiller index that covers 20 U.S. cities fell 3.5 percent from a year earlier. A 10-city index fell 4.1 percent from a year earlier.

Now what this story unfortunately omits to tell us is that, in fact, the nationwide housing index has only really fallen significantly on one other occasion during this period, and that was between 1990 and 1993. Lets look first at the chart for this period. 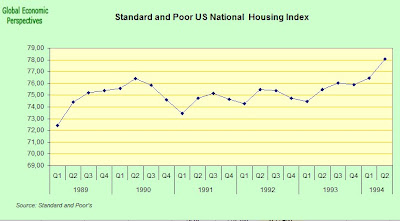 As can be seen the index peaked in Q2 1990 and didn't get back up past the peak level till Q2 1994. (Of course this period did coincide with the election of President Clinton, a point which won't be lost of some of the more astute observers). Now if we compare this with an initial glance at the present slowdown, certain things become evident right from the start. 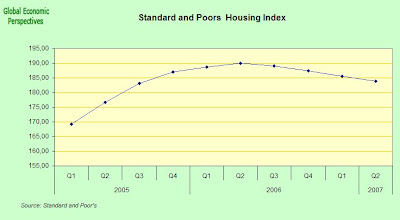 The first of these is that in comparison with the earlier housing correction, this one, on aggregate, is still not that dramatic. This doesn't mean that it won't turn into a much more serious correction, but at the present point the damage is relatively contained. This becomes even more apparent if we look at a rather longer time series. 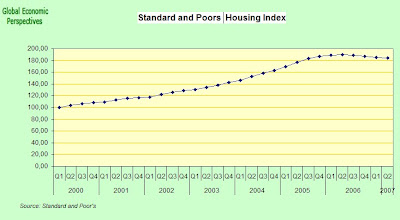 Here we can see that house prices really have had a very big run up since 2000, and the downside possibilities really would be quite large if the correction were to turn into a price rout, but at this stage, all we can say is that this isn't happening. In this sense the latest data are really not inconsistent with the picture we were getting from the national Association of Realtors data yesterday.

Going back even further in time only makes all of this even clearer. 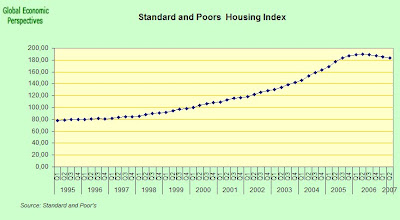 Finally, and just for good measure here is the Case Shiller Composite Index, which even if it doesn't effectively add anything new to the picture, does at least serve to complete our collection of charts. 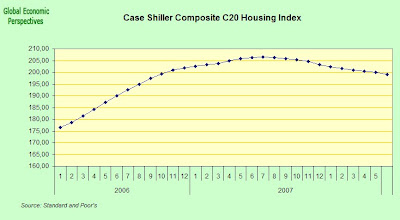