German Q2 2007 GDP Under The Microscope

The German Federal Statistics Office published the detailed breakdown of the Q2 2007 GDP data this morning. Really there were no surprises, and growth was as previously announced (August 14) at 0.3 percent slowing from 0.5 percent in the first quarter. This means that German GDP has grown at 0.8% so far this year, and if this performance was simply repeated in the second half German growth would be around 1.6% for 2007. But the German economy is slowing notably (see below), so they will be lucky to see 1.5% growth for whole year 2007, and downside risks abound so the final number may be considerably below this. Let's take a look at why.

As can be seen the German economy has now been slowing since Q4 2006, and if we treat Q4 2006 (due to the pre VAT rise burst in activity) as something of an anomaly, then we can see a steady decline since Q2 2006. In the present global environment my opinion is that this trend is unlikely to be reversed.

There are a number of reasons for this, as explained extensively in this post (and this one) the German economy is essentially structurally dependent on exports for growth. So lets look at what has been happening to German export performance in recent months:

As we can see the level of German exports has been virtually stationary since February 2007. Now if we look at the % change month-on-month: 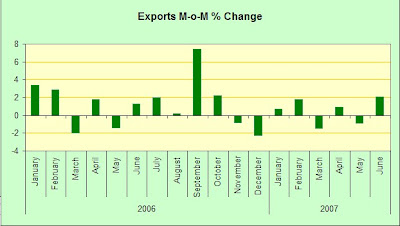 Again it is clear that the rate of increase in German exports has been slowing steadily since September/October 2006, but that again the stationary level since at least February 2007 is pretty clear.

Now if we move to construction activity:

Again a similar picture emerges, with the pronounced slowdown since February being evident. This is even clearer if we look at percentage changes month on month: 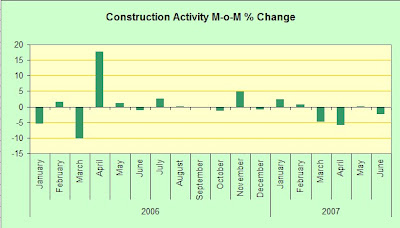 Since February activity has declined in 3 of the 4 months, whilst in the other month (May) it was virtually stationary.

What can we conclude from all this. Well, if we take into account that domestic private consumption in Germany is virtually flat (and domestic public consumption is constrained by the need to reduce the deficit) we can see that at the present time German GDP is being virtually exclusively pulled by fixed capital investment. The time series for retail sales will give some idea of what has been happening to domestic consumption:

This pattern should by now be not entirely unfamiliar, which leaves us as I say, almost exclusively with fixed capital investment to pull the train, and this gives additional significance to the ZEW Economic Sentiment index published earlier this week. Basically it is hard to see investment remaining buoyant in this climate. So, the bottom line is, that downside risks abound, and on my forecast, German GDP will be struggling hard to break the 1.5% annual threshhold for 2007.
Posted by Edward Hugh at 12:08 PM