Well, for what it's worth here's this months reading on the Chicago Fed Midwest manufacturing index: 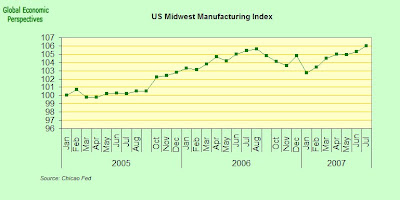 Since January the trend has been steadily up, though midwest manufacturing obviously took a significant knock at the end of last year, as a result the year on year reading is not that substantial. Clearly the line is up though, which to some extent must be a consequence of the relative weakening of the dollar.

The Chicago Federal Reserve Bank said on Monday its Midwest manufacturing index rose in July amid broad-based gains in all sectors.The index gained 0.6 percent to a seasonally adjusted 106.0 from an upwardly revised 105.3 in June, originally reported at 104.9. Still, compared with a year earlier, Midwest factory output was only 0.5 percent higher, trailing the 1.9 percent national increase in industrial production. Output in all four of the regional manufacturing sectors tracked by the Chicago Fed rose in July. The biggest gain came in resource output, up 1 percent on strength in food, wood, paper and chemical production.Resource production ran 3.2 percent above a year ago, outpacing the national 1 percent increase, while year-on-year output fell in the auto, steel and machinery segments.Midwest machinery sector output for July rose 0.8 percent from June but was down 0.7 percent from a year earlier.Auto sector production rose 0.3 percent and steel output was up 0.7 percent in July The Chicago Fed Midwest Manufacturing Index is a monthly estimate of manufacturing output in the region by major industries. The survey covers the five states that make up the seventh Federal Reserve district: Illinois, Indiana, Iowa, Michigan and Wisconsin.

Following is a breakdown of the index components:

The U.S. lost 46,000 manufacturing jobs in August 2007. More significantly, the ongoing losses are taking a cumulative toll on communities throughout the country. We need to adequately enforce our trade laws, and hold countries like China accountable for illegal trading practices such as currency manipulation. Otherwise, we’ll continue to shed manufacturing jobs.