German investor confidence took a tumble this month in the wake of the crisis in the US subprime mortgage market and slowing growth in the Eurozone economies. The Mannheim-based ZEW Institute’s “economic sentiment” indicator fell for the third consecutive month to the lowest level since December last year. At minus 6.9 points, down from 10.4 points in July, the index remains significantly below its historical average.

Claus Vistesen has the story and the analysis here. This graph he produces really says it all: 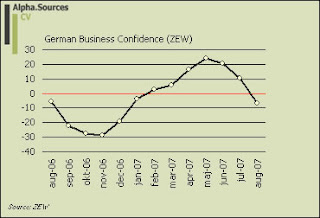 The Institute places a lot of emphasis on the impact of the subprime situation (which has of course had significant repercussions in the German banking sector), but as the graph below - which comes from Claus Vistesen's post - shows, GDP growth in both Italy and Germany slowed notably in both Q1 and Q2 2007, so in this sense the sentiment index reading is far from surprising. 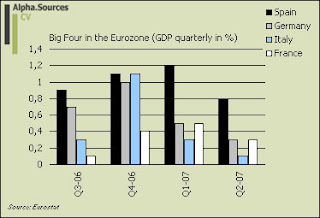 Having said this, if we take a look at a slightly longer time series on the index - from 2000 - we can see just how low sentiment currently is, how it first fell sharply and continuously across the second half of 2006, only to then rebound slightly at the start of 2007. I think all of this is reasonably explicable in that most observers expected a stonger initial slowdown in Germany as we went into 2007 (the VAT rise and all that) - I certainly did, and I was wrong - but then the sentiment index soon responds to the renewed uptick (just how much has this uptick has got to do with the boom that has been going on in Eastern Europe is a question I find myself asking, since the German economy has clearly been the major beneficiary from this boom), only to then fall back again. But what is also reasonably clear is that this turn in sentiment is not a simple by-product of recent events in financial markets, since the origins of the change of mood stretch back several months. Following the evolution of this index over the coming months is going to make really interesting reading I think. 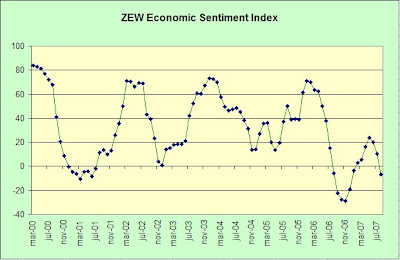