Hungary’s economy grew by only 1.4% year-on-year in the Q2 of 2007 according to data relesed by the Hungarian Central Statistical Office last Tuesday.

This was the lowest quarterly rate to be recorded in Hungary since 1996 (as can be seen to some extent from the chart below which unfortunately only goes back to the start of 2005) and well below the general expectations of analysts, who had mainly been predicting GDP growth of over 2% for 2007. This number would now seem highly optimistic.

Hungary is in fact in the middle of a really tough fiscal readjustment as the government attempts to reduce its budget deficit, which at 9.2% in 2006 was by far the largest in the European Union. The main impact of the austerity programme has been on internal demand and thus Hungary’s GDP growth - which had been hovering around the 4% mark in recent years (see chart below) - has inevitably taken a hit.

Lars Rasmussen, analyst at Danske Bank, says in a research note that:

Preliminary GDP numbers for Q2 published this morning, showed that growth continues to slow quite dramatically. More specifically, economic growth plunged to 1.4% y/y in Q2 – well below our projection (2.4% y/y) and the market expectation (2.5% y/y) – and down from 2.7% y/y in Q1. Growth is the lowest in 11 years, and the slowdown in inflation continues pretty much as expected. The numbers are confirmation that last year's fiscal tightening is working. This is obviously positive and we would expect inflation to continue to ease in the coming months, which could keep the door open for a fur-ther moderate easing of monetary policy. That said, the worsened global credit conditions could weigh on the Hungarian forint going forward and make monetary easing harder, and the Hungarian central bank is likely to move very cautiously on monetary easing.

We will have cause to return to this issue in subsequent posts, but it is clear that the current global market volatility - and the accompanying pressure on the Forint - will only serve to make it very difficult for the National Bank of Hungary to lower interest rates, and thus put some sort of platform under domestic demand. All of which, being blunt, means that the Hungarian authorities now face a very difficult situation indeed.

This is especially true given that some 80% of Hungarian mortgages are in Swiss Francs (and a more substantial analysis here), which means that any significant drop in the Forint would really cause substantial problems for domestic consumption way beyond those which are already arising. On the other hand, of course, given Hungary's currently high inflation rate (in the 8 to 9% range) it will be really hard to achieve export competitiveness without some sort of devaluation of the Forint (which is, of course, already happening as part of the global credit correction). So the Hungarian authorities are stuck between the proverbial rock and the hard place.


To appreciate the full extent of this problem we might like to examine the following chart, which comes from The Global Financial Accelerator and the role of International Credit Agencies, a Paper presented to the International Conference of Commercial Bank Economists, Madrid, July 2007 by Carsten Valgreen, Chief Economist, Danske Bank: 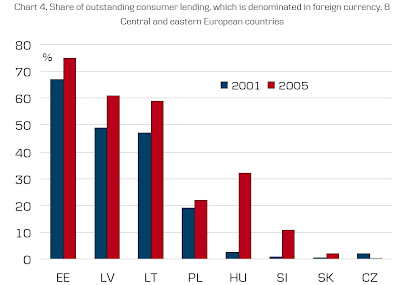 Now the data Valgreen uses comes from 2005, and since that time the position can only have changed in the direction of increased dependence on non-locally denominated currency loans (and especially in those countries who are coming from a lower base). Thus it can be seen that the risk level coming from any currency adjustment is quite significant. The following summary of the content of Valgreen's paper is also interesting, since it reveals to what extent the monetary authorities in a small open economy (and perhaps a not so small one, think Poland) may well lose control in a way which makes any adjustment process very difficult, with or without pegs:

The choice major countries have made in the classical trilemma: ie, Free movements of capital and floating exchange rates – has left room for independent monetary policy. But will it continue to be so? This is not as obvious as it may seem. Legally central banks have monopolies on the issuance of money in a territory. However, as international capital flows are freed, as assets are becoming easier to use as collateral for creating new money and as money is inherently intangible, monetary transactions with important implications for the real economy in a territory can increasingly take place beyond the control of the central bank. This implies that central banks are losing control over monetary conditions in a broad sense. Historically, this has of course always been happening from time to time. In monetarily unstable economies, hyperinflation has lead to capital flight and the development of hard currency” economies based on foreign fiat money or gold.

The new thing – this paper will argue – is that we are increasingly starting to see the loss of monetary control in economies with stable non-inflationary monetary policies. This is especially the case in small open advanced – or semi-advanced – economies. And it is happening in fixed exchange rate regimes and floating regimes alike.

In conclusion then, and returning to Hungary's latest GDP readings, if we look at the chart below we will see that the actual GDP growth in Q2 2007 was only 0.2%, a very low number indeed given what has been going on almost everywhere else in Eastern Europe (although do note the point made yesterday about the screeching to a halt which has also taken place in Estonia). With domestic demand dropping rapidly, and the external environment possibly about to take a turn for the worse things do not really look any too good.

However, if it is any cheer for any of my Hungarian readers, Lars Rasmussen's Danske Bank colleague Lars Christensen is widely quoted as saying that Hungary should not be too worried by apparently falling behind the region. “The slowdown will make more room for growth,” he said. “A lot of countries in Central and Eastern Europe - Bulgaria, Romania and Slovakia - have not taken the measures Hungary have and will be in a worse situation in a few years.” Well, leaving aside the issue of whether we should really be taking delight in others difficulties, I'm afraid that while Christiansen may well be right that it may well not be long before "the Baltic disease" (strong inflow of funds coupled with strong outflow of people, after many years of very low fertility, producing massive overheating and dramatic wage inflation) strikes the mentioned countries, it should be noted that this has NOT been Hungary's problem, although Hungary does - like all the other Eastern European countries - have a very limited demographic time window across which to address the underlying problem, so unfortunately it may well not be true that the ground lost during the current impending slowdown can be so easily recovered later. More on this as we move forward.
Posted by Edward Hugh at 5:17 PM