Japan Services Activity Down In July

Demand for services in Japan fell in July (slightly).The tertiary index, which is a gauge of money households and businesses spend on services ranging from phone calls to leisure, slipped 0.5 percent from June, according to data from the Trade Ministry released this morning. This data point is significant since services these days form such an important part of domestic consumption (Actually, honest answer, I don't really know how much. This is something I should calculate. Maybe when the next quarterly GDP numbers are released). Anyway here's the relevant chart: 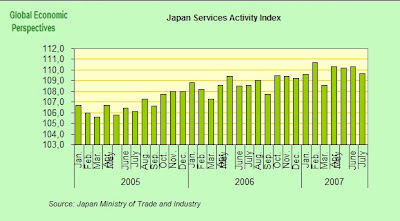 This really confirms my general impression that Japan peaked domestically at the turn of the year. Since that time the general trend has been slightly down. With exports now under threat from the global slowdown this trend should become a little more pronounced as we go into the winter. Also the July reading is significant, since it forms part of Q3. It also accompanies data we have seen about machine orders being slightly down. If this pattern continues a second quarter of negative growth now looks very much on the cards.
Posted by Edward Hugh at 1:13 PM