German investor sentiment on the outlook for the German economy worsened more than expected in September on worries about market turmoil and the strong euro.

The Mannheim-based ZEW economic research institute said its economic sentiment indicator, based on a monthly survey of 304 analysts and institutional investors, fell to -18.1 this month from -6.9 in August. The figure was the lowest since December 2006. 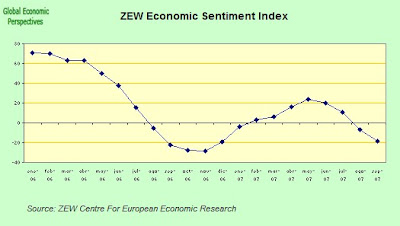 This report adds to growing concern that the collapse of the U.S. housing market will only push further down growth which was already slowing in some of Europe's core economies, Germany and Italy in particular. The European Commission on Sept. 11 lowered its forecast for German growth this year to 2.4 percent from 2.5 percent, adding that the fallout from defaults in the U.S. on mortgages aimed at people with a poor credit history had ``tilted the balance of risks to the downside.''
Posted by Edward Hugh at 1:06 PM