The Leu Continues To Come Under Pressure

Romania's leu fell to a more than six-month low against the euro this morning. The leu in fact declined for a fifth consecutive day, extending losses after recording the biggest daily decline in almost two weeks on Friday. The leu fell 0.9 percent to 3.3905 per euro by 11:08 a.m. this morning in Bucharest, its lowest since March 5. This was a decline from 3.3599 late last Friday.

The leu is now the worst-performing of 26 emerging market currencies against the euro since mid-August.


Here is the one day chart I prepared for last Friday: 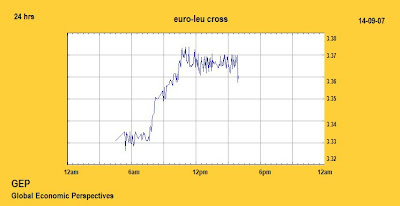 and here is the one month chart (again as of last Friday). 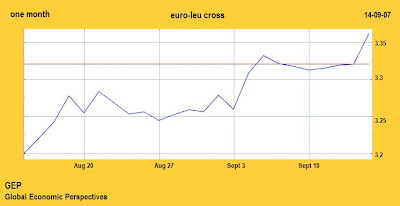 Basically the Romanian currency seems to be the weak chink that currency market operators have found in the emerging market defence system, and I feel that the decline in risk appetite will start to really show its teeth here. In this sense the issue is longer term and structural as my colleague Claus Vistesen explains here.

But there are short term "movers" of the situation. One of these is undoubtedly the climate, and the dependence of the Romanian economy on agriculture. In this sense it is significant - despite the fact that the most pressing problem the country is likely to experience in the mid term is an acute labour shortage as the effects of longer term low fertility and large scale out migration of working age population really start to bite - that Romania's unemployment rate rose in August as a drought that damaged most of the country's crops reduced the need for manual laborers to collect the harvest. The proportion of the workforce out of work rose to 3.9 percent, from 3.8 percent in July, according to data released by the National Labor Agency today.