Japan's export growth slowed in November as the U.S. housing cut demand for automobiles and construction equipment, and the knock-on effect of the sub-prime turmoil started to be noted in other developed economies. Also worthy of note this month is that exports to China fell back slightly, from a revised 1.17 trillion yen in October to 1.14 trillion yen in November. Likewise exports to Europe, which fell from 1.14 trillion in October to 1.03 trillion in October.

Shipments to the U.S. declined on a year on year basis for a third consecutive month, the worst string of declines in more than three years. Since Japan's economy is now more dependent than ever on exports for growth this would seem to be the final nail in the coffin of the coming recession. 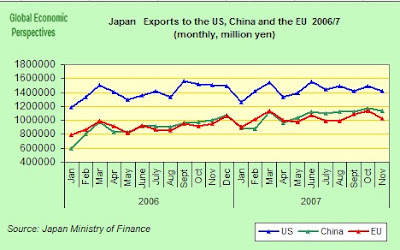 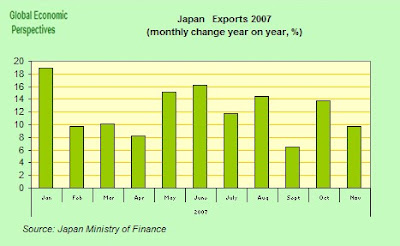 Imports rose 13.2 percent in November, the ministry said, after climbing 8.6 percent in the previous month, causing the trade surplus to fall 12.2 percent to 797.4 billion yen. Analysts expected an 11.8 percent increase.

Exports, we might like to remember, led by shipments to Europe and China, carried almost the entire weight of Japan's 1.5 percent annualized growth in the third quarter.

Oh yes, and almost as an afterthough, the Bank of Japan decided yesterday to maintain the 0.5% base rate on hold for yet another month. Did anyone in their right mind ever imagine otherwise!
Posted by Edward Hugh at 9:49 AM