Well, this is almost getting boring at this point, as a certain predictability and inevitability enters into all the data, and especially the sentiment indexes, which are down, down, and down again. Today it is the turn of IFO Institute's German business confidence index to fall to its lowest level in almost two years in December as rising credit costs, higher oil prices and the euro's appreciation threatened to curb growth in Europe's largest economy. 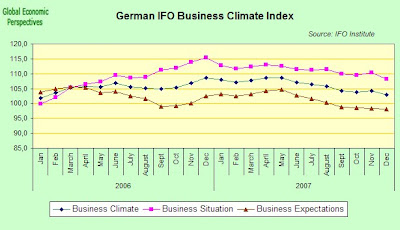 The Munich-based Ifo research institute's business climate index, which surveys 7,000 executives, declined to 103 from 104.2 in November.

"The risks to price stability over the medium term are clearly on the upside" Jeab Claude Trichet told the European Parliament's economic and monetary affairs committee in Brussels yesterday, and, he might have added, the risks on the economic performance and growth front are all pointing to the downside. But still, a mandate is a mandate I suppose. Now how did the poem go? Ah yes, half a point, half a point, half a point upward, into the valley of death rode the 600.
Posted by Edward Hugh at 1:32 PM