Japanese households became the most pessimistic they've been in almost four years in November as fuel and food prices rose even while wage growth remained stationary, leaving consumers even less willing and able to spend. An index that measures confidence among households with two or more people slid to 39.8 last month from 42.8 in October, the Cabinet Office said in Tokyo today. A reading below 50 means pessimists outnumber optimists. 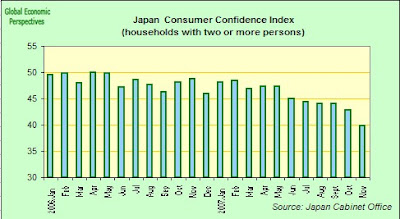 The drop prompted the government to cut its assessment of consumer confidence for a second straight month, the first back- to-back downgrade ever. Slower consumer spending at a time when demand in Japan's major export markets may be waning will almost certainly compel the central bank to keep borrowing costs oh hold in coming months. 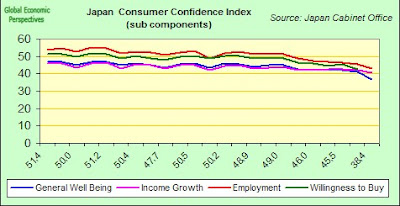 More indication that the demand internal situation in Japan continues to deteriorate was provided earlier in the week by the latest indication of the Economy Watchers Index. This survey of barbers, shopkeepers and others who deal with consumers, fell for an eighth month to 38.8 from 41.5 in October, according to the Cabinet Office in Tokyo yesterday (Japanese only at present). A number less than 50 means pessimists outnumber optimists. 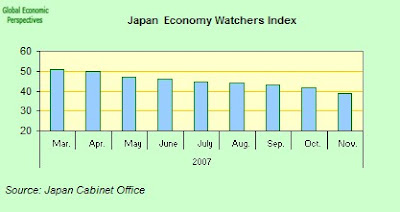 And we haven't seen the bottom of this yet, since merchants expect conditions to deteriorate in the next two to three months. The outlook index fell to 38.8, the lowest since March 2003, from 43.1 in October, and the Cabinet Office downgraded its assessment for the index for a second month, saying that sentiment is "very weak" having described it simply as "weak" in October.

And confidence at small businesses, which employ more than half of the Japan's workforce, is deteriorating according to an index of sentiment published by the Shoko Chukin Bank. This survey is carried out among small and midsized companies, and fell to 46.9 in November, the eighth straight month pessimists outnumbered optimists.

On a more positive note, Japan's October machinery orders rose at a rapid 18.7% year on year clip, signaling that companies have been increasing spending plans to meet Asian and European demand for chips, cars and electronics. Private sector orders climbed 12.7 percent to 1.08 trillion yen ($9.7 billion) from September, when they fell 7.6 percent, the Cabinet Office said in Tokyo today. But the biggest push came from government orders (up 21.6%) and overseas demand (up 16%). As can be seen in the chart below (click-over for better viewing), overseas demand has been much stronger than total domestic in recent months. 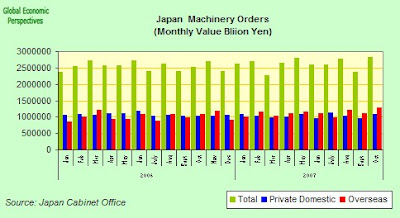 Exports to China and Europe, we should remember, surged to a record in October prompting companies to spend more on factories and equipment. And just to remind us of this I am again reproducing the key chart, which indicates just how the composition of Japanese exports is changing, with Europe and China more than making up for an absolute and relative decline in the importance of exports to the US (on all of which see this post here). 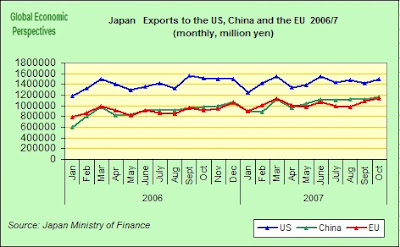 Sales overseas, we should remember, were responsible for almost all of Japan's economic growth in the third quarter. But we should also remember that the Economies of Japan's European customers are now slowing, while China is entering a "battle of the titans" type confrontation with an inflation process which is increasingly getting out of control, with an uncertain prognosis over the immediate and mid-term future.
Posted by Edward Hugh at 2:15 PM