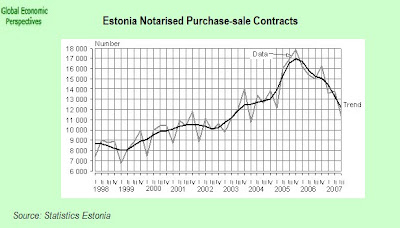 According to Statistics Estonia, the more conservative loan policies of the banks and the increase in interest rates (ie the credit crunch) have been the main factor influencing the slowdown of real estate market. If at the beginning of 2006 the interest rates on housing loans granted to individuals were still below 4% (these loans are largely, remember, denominated in euros), by September 2007 they had already reached 5.9% (although please note, if we look at the inflation rate - 9.1% in November - these are still extraordinarily negative), and of course, in Estonia, unlike the United States, there is no mega-conduit rescue proposal on the table to come to the aid of those paying the interest. If (or rather when) the value of the currency moves (as it surely has to if Estonian GDP is not to go into straight decline at some point) and more realistic interest rates (ie ones which bear some relation to the level of risk involved) come into effect, then distress among households will become severe. Basically a rescue package will need to be put together, and the capital (book) value of all these outstanding loans will have to be adjusted down according to the actual level of distress produced. Essentially, all those who from the sidelines - the EU Commission, the IMF, the ECB, the World Bank, the Economist, etc - have had a hand in all this with their constant stream of policy recommendations, recommendations which have been by-and-large followed (ie leaving out the odd 'detail' of excess here, too much government spending there, I mean here that policy needs to be realistic, humans, and even more to the point governments, are never perfect, so this part should be factored in from the start, by allowing a margin.....) - will need to accept their share of the responsibility for the mess which has been produced as a result. As Oscar Widle put it "to lose one parent might be considered a misfortune, but losing two, that has to be carelessness". Well the ECB has lost three plus (The Baltics, Bulgaria, Romania, possibly now Poland, and Russia is now definitely wobbling- this latter is not the direct responibility of the ECB I know, but is certainly is in the policy sphere of the World Bank and the IMF).

These institutions cannot, like Pontius Pilate, simply wash their hands of all this (well they can, but they should at least be ashamed of themselves if they do), having aided and abetted it during the upswing by recommending policy proposals which quite simply failed to take account of the quite unique demographic characteristics of this whole region. You cab incant the mantra that Demography Doesn't Matter till you are blue in the face, but unfortunately it does, and I will tell you how we know it does, we know it does by looking at the macroeconomic data, in which (plagiarising Solow's famous dictum) we may not be able to discern the presence of the computer, but we can certainly see the impact of fertility, and especially of decades of below replacement fertility. As I say in my recent analysis of Russia's burgeoning inflation problem:

Well it seems to be the case that this sudden acceleration in growth and inflation is intimately related to the very specific and unusual demographic profile which most of Eastern Europe has inherited from its recent past. So one of my central arguments is that what we have here is certain a kind of mis-match. A mis-match between a basically third world. “developing-country-type” income level (for this reason they tend to be called “emerging economies”) and a very-first-world-type age structure - in the sense that many of these societies have now had below replacement fertility for decades, and in some cases several decades, with the working age group entry level cohorts (15 to 24) down to around 65% of their earlier high point, and the key 25 to 49 age group peaking nearly everywhere as a proportion of the total population, before the total working age population finally enters terminal decline. This is very different from the sort of demographic dividend driven growth we are seeing across most of the other strong growth emerging economies, and the economic consequences of this difference are now becoming all too evident.

Of course, we are still waiting for an adequate Mea Culpa for the Argentine case, but at least people have generally lined up and accepted their "haircut" with dignity. Now it will be the turn of all those who piled in and fuelled all this madness. It is easy to get things wrong, we all do, the important thing is to know how to accept when you have been wrong, to recognise mistakes, and to be "big" enough to take the necessary remedial steps.
Posted by Edward Hugh at 8:29 PM