Well perhaps this news is hardly surprising, but German investor confidence - as measured by the ZEW Center for European Economic Research in Mannheim - dropped to its lowest level in almost 15 years this week. 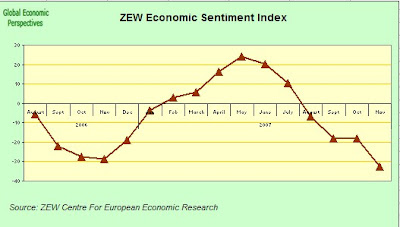 The Economic Sentiment index - which attempts to measure investor and analyst expectations - fell to minus 32.5, the lowest reading registered since February 1993. This was down from a 'mere' minus 18.1 in October. Looking at the chart, of course, it is plain that we have almost been here before, in November last year, but an unexpected upswing in the demand for German exports globally (and especially in the East of Europe) and a weaker than expected negative reaction from German consumers to the 3% VAT increase introduced in January, meant that the bleakest expectations of that moment were not realized. However now the 3% extra cost of purchasing is still with us, and the export upswing is much weaker than it was, and in addition the financial turmoil of last August is having a much stronger than expected impact on construction activity in Germany.

As a result growth in Europe's biggest economy is undoubtedly slowing, and quite fast, and, naturally, this is the conclusion that the ZEW institute itself draws. Among other factors mentioned is that the euro has risen 8 percent against the dollar in the past three months alone, and reached a record high of $1.4752 only last week, eroding on it way up the competitiveness of German exports, whilst at the same time making products from the US companies which compete with Germany in third country markets cheaper. At the same time, higher energy bills and tighter lending conditions have sapped companies' and consumers' spending power.

One other key data point which serves to back up the ZEW finding is the fact that growth in Germany's key manufacturing sector is now slowing notably. Morgan Stanley's Eric Chaney, in noting the decline which was also registered in the IFO index last month, took the opportunity to draw attention to the rather dramatic way in which German manufacturing seems to be slowing.

The devil is often in the details, as the saying goes. This might be true for the euro area economy: while the widely scrutinized headline Ifo index posted only a modest slip in October, one key detail of its manufacturing section sent a much gloomier message: production fell from a cliff in Germany, the powerhouse of the recovery so far.

More evidence for this situation was to be found in the RBS/NTC Eurozone Manufacturing PMI (Purchasing Managers' Index), which came in at 51.5 in October, in line with the preliminary “flash” reading. While the reading indicates (as does any over 50) that output is still expanding, the fall from 53.2 in September was the largest decline to be registered in almost three years and the reading showed the weakest monthly expansion since August 2005. This weakening in the PMI was led by Germany, where the index showed the largest points fall in the eleven-year history of the survey. The PMIs also fell in Spain and Italy, while the reading was unchanged on a month earlier in France.

This easing-up in the rate of growth is the steepest recorded since November 2004, largely reflecting the sharpest slowdown in production growth seen in Germany for five years. Although Germany still continued to record the fastest growth of output in the eurozone big-four, the rate of increase was the weakest for over two years. Output growth also slowed to the weakest for at least two years in all the other big-four countries, slowing to near stagnation in both France and Spain, with France recording the weakest rate of expansion of the big-four.

Output rose for investment, intermediate and consumer goods, with the former continuing to show the strongest rate of increase. However, investment goods production slowed to the weakest since November 2005, reflecting a particularly sharp easing in Germany.

Growth of new orders was only very modest and was the lowest for two-and-a-half years. New orders in fact fell in Germany for the first time since August 2005, dropping at the fastest rate since November 2004. A marginal decline was also recorded in Spain (the first drop since June 2005). New orders rose in both Italy and France, but in both cases the increases were only very modest.

New export orders rose only modestly, showing the weakest increase during the current 29-month period of expansion. Sharply slower growth in Germany and Italy brought their export growth into line with the modest pace seen in France. Meanwhile, new export orders fell (though only very marginally) for the second month running in Spain.

Backlogs of work fell for the first time since June 2005, dropping in Germany, Spain and Italy. Stocks of finished goods meanwhile rose slightly for the first time since March 2005, caused by sluggish sales. Rising stocks and falling backlogs, of course, point to weak future production, and this is really the overall meassage which we are getting from the data at this point.
Posted by Edward Hugh at 3:12 PM