Is Europe currently facing a widespread credit crunch, or are problems in the banking sector (aka "the financial turmoil of last August") only a US phenomenon? Reading a lot of the articles which have been appearing in the financial press recently you could be forgiven for thinking that the latter was the case, but in fact it isn't, and the problems which are emerging in the European banking system are every bit as important as those which are to be found in the United States, a detail which was highlighted by Bank of England governor Mervyn King's statement earlier this week that the Bank is now preparing to cut interest rates several times over the next year in an attempt to reduce the knock-on effects which the banking sector problems will almost certainly have on the real economy. Or again we could take the statement from the ECB - in its November Monthly Bulletin released yesterday - that it will monitor "very closely" all developments in the eurozone banking sector and is ready to act on interest rates as and when necesary, noting that "risks to the outlook for growth are judged to lie on the downside." and that "As regards the financial markets, the governing council will continue to pay great attention to developments over the period to come."

So all of this makes it a little strange to note that while the dollar has been hard at it "slipping and a sliding" the euro has in fact continued to rise and rise in almost vertiginous fashion, and this despite the recent warning from Jean Claude Trichet - who seems to have come out of virtual hiding for the occasion - that "brutal (foreign exchange) moves are never welcome."

A number of reports which have been published during the week and comments from those responsible for the overseeing of the eurozone banking sector do help underline just how serious the situation in the eurozone potentially is. First off we have the latest EU Commission economic forecast which draws attention to the way in which the home loan credit squeeze is now begining to work its way through the EU economies pointing out in the process the likely implications of this for economic growth in the region:

An unexpectedly sharp correction in house prices resulting from the global credit squeeze poses a significant risk to growth in Europe, according to the European Commission.

Now even if I personally don't regard the European Commission as last word in economic commentary and analysis (and in particular I tend to take each and every statement which emerges for the Economic Commission headed by Joaquim Almunia - a far cry this from the days when the department was run by the ever interesting Pedro Solbes - with the proverbial pinch of salt) I do think that this time round there are good reasons for sitting up and takeing note of what is being said, and in particular of the fact that the Commission itself is now signalling the growing significance of the problem. In particular, and living in Spain, I cannot but agree with Almunia when he says that since housing and construction have contributed so enormously to Spanish growth, the international problems will more than likely have a particular effect here. The Spanish consumer confidence index has now hit all time record lows for the second month in succession.

Secondly we have the business confidence reports (the German ZEW and IFO and the Italian ISAE) but in particular the latest results from the KPMG/NTC business outlook survey which found that business confidence is dropping rapidly across the entire eurozone. The survey found that healthy confidence in the European business outlook which was so evident earlier in the year has now given way to much weaker expectations for business activity. The contrast here with the BRIC economies - Brazil, Russia, China and India - where the underlying conditions are evidently very different from those in the more developed economies, couldn't be clearer.

The confidence in the European business outlook of earlier this year has given way to much weaker expectations for business activity, revenues, profits, capital spending and employment. In contrast, corporate confidence in Brazil, Russia, India and China, the so-called Bric countries, is sky high....With Russia, India and China accounting for half the world’s economic growth for the first time in 2007, emerging markets arguably now have sufficient weight in the global economy to withstand an advanced world financial crisis.

Half the world's economic growth! This isn't "decoupling" as people imagined it (of Europe and Japan from the United States), but it is a massive "recoupling" of the global economic train, and of historic proportions, with the developing economies now assuming a role from which it seems there will be no turning back.

Clearly the ability of these developing economies to withstand a major financial crisis and economic slowdown in the developed economies is what precisely remains to be seen, and in particular it will be interesting to see who will withstand better than who. Will Russia and parts of Eastern Europe, for example, where rising inflation and rampant labour shortages following the evolution of very low male life expectancy, large scale labour out-migration and 20 years of rock bottom fertility be able to sustain the high rates of GDP growth which are currently taking place, or are some developing economies in serious danger of overheating and consequent correction. Well, we are all now going forward to a robustness test, and it will be interesting to see just who has been right and who has been wrong here.


Finally, and and returning to the main topic of this post, we have the question of the ongoing problems which beset the European banking system. Here some of the recent statements of José Manuel González-Páramo - the ECB board member responsible for open market operations - prove to be quite revealing. In a recent interview with the Financial Times González-Paramo indicated that there was "no deadline" and that the ECB Emergency help to try to calm markets would be provided for “as long as necessary.... and ...to the extent that money markets remain subject to tension, we will stay there”. He also openly admitted being taken aback by the scale of recent write-downs in the banking sector adding that “frankly speaking I did not expect them to be of this size.”


Now as the FT also notes the ECB has in fact managed to bring overnight interest rates back into line with its main policy rates, but three-month inter-bank rates still remain stubbornly high (a reflection of the nervousness which there is in the banking sector when it comes to one bank lending to another), and these higher than desired rates thus threaten to act as a brake on real economic activity and to drag-down growth. As we can see from the chart below, the 3 month London Interbank Rate on euro denominated loans has come down somewhat since a month or so ago, but the rate still resists a correction back to "normal" conditions. The 3 month Libor rate is useful as an indicator, since it gives us one of the best readings we can get on "sentiment" in the banking sector, and the outlook certainly has not improved at this point. Here is a chart with the latest data we have from the British Banking Association: 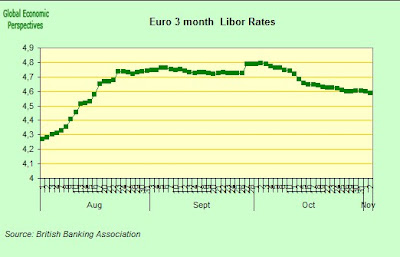 Putting this problem in a somewhat broader context, possibly the most widely quoted source for the state of the eurozone banking system is the quarterly bank lending survey published by the ECB. Normally a rather drab and tiring document, full of technical detail, last October's edition was eagerly anticipated and widely read. In particular for this:

So basically the problem is an ongoing one, affects both households and companies, but companies even more than households. Perhaps this is the background to some of the gloom that can be found in the business sentiment survey cited above.

This is not a situation for panic, but it is one for concern. According to a statement issued by the ratings agency Standard & Poor's earlier today, European banks are well positioned to face what is likely to be an "exceptionally demanding" market environment and in general retain their stable credit ratings outlook. S&P's do note, though, that the banks face higher borrowing costs and scarcer liquidity in coming months, with the expectation that interbank conditions will "remain relatively tight until at least early 2008". So the scene is definitely set, now all that remains is the wait to see just how all of this will actually affects the pound - or the euro - you have in your pocket.

The problems mentioned in this post are a long long way from disappearing. The Financial Times this morning reports that the ECB announced yesterday that it was taking fresh emergency action to pump funds into the money markets as renewed fears circulated that liquidity in European credit markets is once more starting to dry up.

On Friday night, the bank said it would inject an unspecified amount of extra liquidity next week, noting “re-emerging tensions” – and would do so until at least the end of the year. Earlier, Jean-Claude Trichet, ECB president, had pledged continuing action to keep short-term money market interest rates in line with its main policy rate.

The new promise of intervention came as three-month US interbank rates rose for the eighth day in a row to 5.04 per cent, more than half a point higher than the US Fed Funds target rate of 4.5 per cent.

Three-month money usually trades just above the Fed Funds rate which is 4.5 per cent. Europe and UK money markets are showing similar strains.