While it should be obvious to anyone that the most of the national economies in the Eurozone are slowing rapidly, and have been in the Italian and German cases since early summer, this downturn will present some new features. In particular the former "stellar economies" - Spain, Ireland and Greece - may be the worst affected due to their heavy dependence of construction activity for obtaining growth, and due to the dramatic nature of the downturn since mid-August in the property sectors of those countries.

Up to now the data in this regard has been rather anecdotal, like the big drop in cement output in Greece, but today we have a first real data reading (retail sales etc data for the relevant period will still be a little while arriving) in the shape of the Spanish Consumer Confidence Index. Over to Bloomberg:

Consumer confidence in Spain declined to a record low in September after the fallout from the U.S. subprime-mortgage slump pushed up borrowing costs worldwide.

The Official Credit Institute's index of consumer sentiment dropped to 80.2 from 86.5 in August, the institute said today on its Web site. That is the lowest reading in a series that started in 2004.

The cost of inter-bank loans jumped in August after European lenders disclosed losses in the U.S. mortgage market. That pushed up payments for Spanish homeowners who have variable-rate loans tied to the 12-month interbank lending rate for the euro region.

``Spain is heading for a marked slowdown and by mid-2008 we expect it to be growing at decidedly below-trend rates,'' Dominic Bryant, an economist at BNP Paribas SA in London, said in an e-mailed note.

The 12-month Euribor rate jumped to 72 basis points above the European Central Bank's benchmark interest rate this month, twice the average spread since the debut of the euro. In Spain, 95 percent of home loans have variable interest rates. 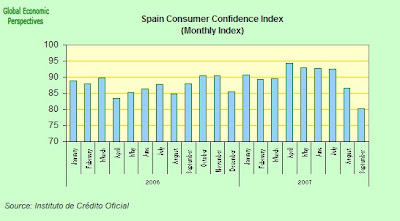 and here's the chart for the sub-components: 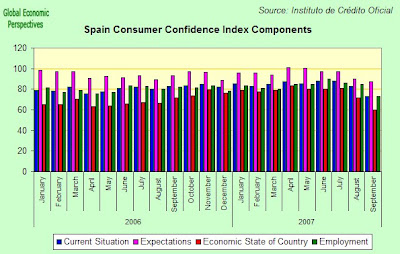 What can be seen from this chart is that all the components reached a peak this summer in April and May, in June and July they were all down, but only to the level of February/March, then from July onwards the whole thing starts to subside, and who knows if we have touched bottom yet, since all the forward indicators are a bit more positive, but my feeling is that that is rather an indication of the fact that people still don't appreciate the gravity of what is happening. It hasn't sunk in yet, and people are still expecting the housing market to pick up in a quite unexpected fashion. Spain could face a hard landing. If things continue to move at this speed it will get one.

Also service activity in Spain, which accounts for some 60 percent of the economy, posted its slowest expansion in almost two years in September, according to a separate survey of executives by NTC economics. The index fell to 52.4 from 53.5 in August. 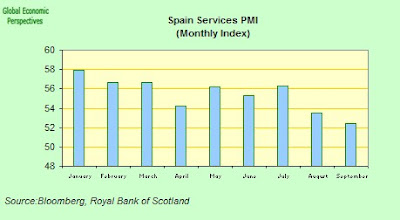 A similar picture can be seen in the manufacturing PMI, although manufacturing accounts for a much smaller part of total economic activity in Spain than in some other European economies. 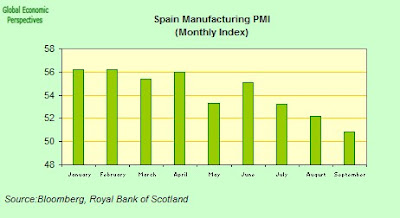 In the case of manufacturing, the rate of expansion has been slowing since June, although some reduction of activity is normal in the summer. It is the September reading which should give cause for concern here.

At the present time we are simply talking about a slowdown in the rate of expansion, but how far is this now away from an actual contraction. Not very, I would say.
Posted by Edward Hugh at 5:42 PM

An anecdote: I visited Madrid one year ago. When I attended a soccer game of Real in the Bernabeu Stadium, I noticed that on the giant flat screen displays there were lots of adversitements for easy credit. And that was last year, when I thought the general mood was optimisticic and everything was in order. No signs of panic or economic slowdown. Maybe I discovered another obscure economic early indicator?

Well maybe. There is clearly a huge quantity of sub-prime here in Spain. People were encouraged to take on debt without think of whether they could afford to pay when interest rates rose.

After rates started to rise people started with their credit cards, then with consolidating loans, you know, these "put all your payments into one easy bundle" etc etc.

And I noticed this sort of thing was being advertsied on radio channels with music which migrant painters and decorators listened to while they worked etc. So the target audience was hardly the elite.

I don't know where all this is going to stop now, but I do know it has begun. Hardly a flat is being sold here in Barcelona at the moment. People aren't even visiting flats. They reckon that 50% of the realtor/estate agent offices will close between now and the end of the year.

As I say, its like someone just threw sand in the machine. I don't think its about interest rates any more.

I will keep reporting as there is something interesting to report.