The data for August retail sales for Germany were released by the Federal Statistics Office at the end of last week:

WIESBADEN – According to provisional results of the Federal Statistical Office, turnover in retail trade in Germanyin August 2007 was in nominal terms 1.2% and in real terms 2.2% smaller than that of the corresponding month of the previous year. The number of days open for sale was 27 in August 2007 and 27 in August 2006, too.

When adjusted for calendar and seasonal variations (CENSUS-X-12-ARIMA), the August turnover was in nominal terms 1.1% and in real terms 1.4% smaller than that of the preceding month.

Here's a chart of the monthly index since January 2006: 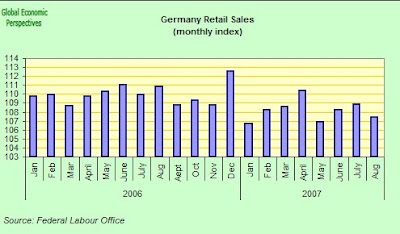 And here are the monthly year on year changes. 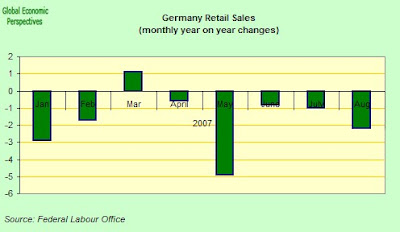 Incidentally, I really don't see how anyone could have been so silly as to argue that a 3% increase in the VAT consumption tax would have no impact on domestic demand, the effect is evident even to the naked eye, isn't it?
Posted by Edward Hugh at 2:24 PM