Ok, well I think the chart below is pretty revealing. It shows quarterly trends in Germany for population, economically active population, employed and unemployed.

Population and labour participation in Germany 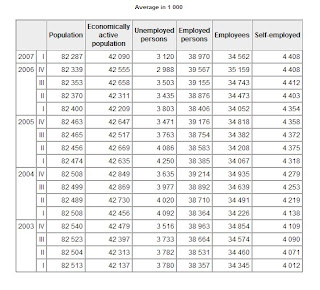 Now the first thing to note is that the German population actually peaked in 2003, and has since been declining. The same also goes for the economically active population. The key point to grasp here is that the unemployed population has a natural tendency to decline in Germany, even with zero economic growth. Now obviously, and in particular during 2006 and the first quarter of 2007 the German economy has been growing at what is - by German standards a pretty high rate.

The second thing to note is that these are unadjusted data, so to get a real idea of what is happening you need to compare the same quarter from one year to another. So if we compare, as an example, data for the first quarter, we can see that between Q1 2005 and Q1 2006, the economically active population dropped by some 425 thousand, while unemployment dropped over the same period by some 440 thousand, so effectively there was a small decline in employment, despite the sharp fall in the unemployment rate. Now if we come to Q1 2007, we can see that - when compared with Q1 2006 - the economically active population dropped by some 120,000 people (less than in the previous year, presumably reflecting the fact that with the improved labour market conditions more people proportionately remained economically active) while unemployment dropped by nearly 700,000, which shows that there was a real and substantial increase in employment in 2006.

So the point I want to make here is that the improvement in employment in Germany in 2006 was real and substantial, but that with those population numbers ticking on downwards, and hence the economically active population trending down, the "natural unemployment rate" outside of substantial recessions will do so too, regardless of real economic conditions.

Which leaves us with the question as to where the labour force will come from to fuel future economic expansions. This becomes doubly important when you take into account - as I explain in this post over on Demography Matters - that migration flows are now more or less neutral, that is, almost as many people leave each year as enter. Presumeably Germany will at some point have to change its immigration policy, but it will be interesting to watch just how and when.
Posted by Edward Hugh at 6:52 PM