Migrant Flows Into The US

I found this piece in Bloomberg yesterday interesting:

The U.S. housing slump is squeezing Mexican migrant workers from Los Angeles to New York, where permits for new home construction are down 20 percent this year, according to the Census Bureau. That's reducing the pace of money transfers, the second-biggest source of dollars in Mexico after oil exports, and turning the peso into a laggard among Latin American currencies.

I found it interesting since it seems to suggest that movements in the construction sector are a pretty good proxy for rates of flow of migrant workers. This point was in my mind following my recent post on the Irish economy, and the role of migration in reinforcing the Irish boom. This talk of the reduction in the rate of increase lead me to start thinking that remittances flows are probably also a good proxy for the intensity of migrant flows (since the most recent migrants tend to send proportionately more, and then the flow tapers off over the years).

Remittances rose 3.4 percent in the first quarter, the slowest growth in eight years. The peso has strengthened 0.1 percent this year to 10.8137 per dollar, the second-worst performance among the most-traded currencies in the region.

Interestingly the article also mentions that:

The number of people caught trying to enter the U.S. illegally from Mexico dropped almost one-third in the first quarter to 265,000, according to U.S. Border Patrol data.

The article mentions the crackdown on migration as one of the reasons for this reduction in the number of people being "caught in the act", but I am not so sure this is such a good explanation. Clearly increased surveillance can act as a disincentive, but so can the lack of availability of employment, and, ceteribus paribus, you would on the face of it expect increased vigilance to produce more, not less, apprehensions.


All of this is of course significantly affecting the valuation of the Peso. In fact:

The only Latin American currency to do worse than the Mexican peso this year is the Argentine peso, which has fallen 0.7 percent because of daily dollar purchases by the central bank. The Colombian peso gained the most, up 17 percent, followed by the Brazilian real, up 9.4 percent.

Morgan Stanley and Dresdner Kleinwort predict the Mexican peso will fall for a second straight year because of the slowdown in money transfers, a drop in oil production and weakening demand for the country's exports. New York-based Morgan Stanley forecasts a 5.1 percent drop to 11.4 pesos per dollar by year-end. Dresdner, the investment banking unit of Munich-based Allianz SE, predicts it will slide to 11.19. The peso fell 1.7 percent in 2006.

And, as for the role of construction in all of this:


The decline in illegal immigrants mirrors the U.S. housing market. Residential construction in the U.S. fell by 17 percent in the first quarter, according to the Commerce Department. The construction industry is the biggest source of work for Mexicans in the U.S., accounting for about 20 percent of jobs, data from Mexico's central bank shows.

The pace of money transfers has moved in step with the U.S. construction industry since the late 1990s, said Dawn McLaren, a research economist at Arizona State University in Tempe. The correlation between the two has become so strong that she uses border apprehensions as a ``leading indicator'' for the U.S. housing market.

So border apprehensions could be consider a "leading indicator" for the US housing sector. If this is so, then on recent evidence we should expect the housing market to continue to remain flat. Also, since one of the points I am trying to argue is that migrant flows represent a non-linear feedback mechanism which reinforce the boom, when they slow or stop, this also has non-linear negative feedback consequences in the mid to longer term.

Really I am saying nothing especially new here, since Nobel Economist Simon Kuznets long ago identified what are known as "Kuznets Cycles" which are mini-cycles driven by migrant flows with a 10 to 15 year lag. Obviously with financial markets becoming somewhat more efficient the lead-lag times have probably reduced considerably.

What Kuznets didn't think about, however, was the impact of these flows on age structures and population pyramids. I am now finding myself rethinking just exactly what it was that happened in the US during the 1990s. As we all know there were massive inward migrant flows - 1 million undocumented workers a year from the late 80s I think. And I am being lead to ask myself: did the US median age actually drop during the 1990s? If it did that would explain a lot of things.

Now if you look at this graph (which Ken Gronbach kindly maintains at the top of his Changing Demography Blog) you will see that there have been important structural shifts in the US population over the last 50 years, and in particular the presence of what Gronbach calls the "silent generation" (click over image for a better view). 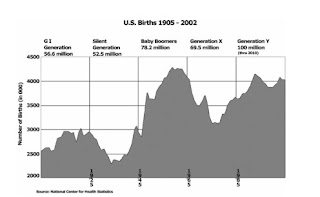 Now if this idea is right - that migrant flows represent a strong feedback process (or a strong version of what Keynes would have called the multiplier), and that US median age actually fell during the 1990s (which is an idea that needs to be checked and calculated) - then we have another potential explanation (aside that is from productivity and the arrival of the internet) for what Alan Greenspan called the raised cruising speed of the US economy. At this point all of this is largely conjecture, but since the underlying idea seems to fit in so well with what we have been seeing here in Europe - in places like Ireland, the UK, Greece and Spain (and in each of these cases median ages have been going down not up in the last few years) - and indeed if any of this has any validity it does seem to add some force to my old idea that what central bankers should actually be doing is targeting median ages.

Bloomberg today has another piece on roughly the same topic:

The slump in homebuilding, the deepest since 1990, has so far taken only a modest toll on the U.S. job market. Workers like Francisco Leon may be part of the explanation.Two years ago, Leon, an undocumented immigrant from Guatemala, had little trouble finding construction work five days a week in northern Virginia. Nowadays, the 22-year-old mainly does odd jobs, often only two days a week.

As the article notes, the preponderance of undocumented migrant workers in construction may be one of the reasons the brunt of the housing slowdown is not showing in the official employment figures:

Housing-related jobs peaked at about 8 million in April 2006, representing almost 6 percent of the U.S. workforce, according to a tabulation of such jobs compiled from the Labor Department's establishment surveys for a Credit Suisse report that Feldman helped write. Such jobs represented about 18 percent of the growth in payrolls between 2003 and 2006, the report said. In the past year, they've declined about only 2 percent at a time when housing starts were off by about a third. Building permits in April slumped to the lowest in a decade.``Immigrants might be bearing the brunt of the slowdown'' for now, Feldman said.

So a lot of what is happening may not be showing up in the official stats:

Just as government labor statistics don't count many of the estimated 12 million undocumented immigrants, they miss many independent contractors, whether foreign-born or not, according to Daniel Jester, an economist at Moody's Economy.com in West Chester, Pennsylvania. The Labor Department's establishment survey, which covers companies larger than 1,000 employees and a random sampling of smaller firms, fails to capture independent contractors who make up more than 20 percent of all workers in construction, Jester wrote in an April research paper. What's more, those self- employed contractors aren't picked up by the government's weekly figures on filings for unemployment claims.


Now while official agencies lack data, voluntary ones like the Pew Hispanic Center do try to keep some sort of track of what is happening among Latinos - even if they are, at the end of the day, still dependent on the same official data. Back in March they published this data sheet (which relates only to 2006, and what we really need to see are the current numbers) which notes the following:

In my post Relationship between border apprehensions and economic growth, I noted research by Dawn McLaren, a research economist at Arizona State’s business school; who postulates that "falling border apprehensions may be an early predictor of where the economy is headed." Notice that the research refers the US economy as a whole and not just the housing sector. The linked article states that “For the past decade, Ms. McLaren has been tracking the relationship between border apprehensions and economic growth. Every time apprehensions declined, the economy slowed about 12 months later, she found. “About a year before a recession, or a down cycle, there was a slowdown in the number of arrests” on the border.”

Thanks for the link.

"Notice that the research refers the US economy as a whole and not just the housing sector."

Agreed. This is also important, but what really interests me at the moment is - given the close association between liquidity, interest rate policy and housing activity - how these flows are now increasingly linked to housing, and indirectly to interest rate moves.

In this sense I am interested in comparing societies which have substantial housing booms - all of which seem to have median ages under 40 - and noting the migrant flows as indicators. Of course, all of this is self re-inforcing, and moves around the relative median ages between societies.

Germany, which has had no housing boom to speak of in the last ten years, also has virtually no net immigration. Hence Germany continues to age much more rapidly than - say - Spain, and this only makes existing problems worse. What I want to say is that all of this is non-linear and is not captured in existing macro models.