Italy Enters Recession, But When Will It Leave?

According to preliminary data from national statistics office ISTAT this morning Italy's GDP fell 0.3 percent in the second quarter compared with the first three months of the year and was unchanged year-on-year (ie zero percent annual growth). Final data and a detailed breakdown for the second quarter will be released on Sept. 10. In the first quarter, GDP rose 0.5 percent quarter-on-quarter and increased 0.3 percent year-on-year. 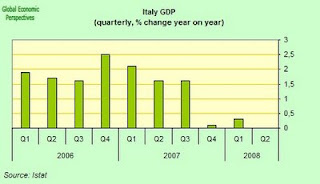 European Central Bank President Jean-Claude Trichet stated yesterday that economic growth was expected to be "particularly weak" in the third quarter after bank policy makers left borrowing costs at 4.25 percent, so it is not unreasonable to anticipate a second consecutive quarter of negative growth in Q3, and hence in all probability Italy is now in recession. 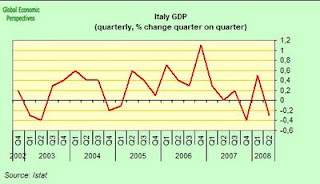 Italian consumer confidence in July slumped to the lowest since 1993, when the country was also - we should note - in a recession following abandonment of the EMS. The Isae Institute index fell to 95.8 from 99.9 in June. In November 1993, the 26-year-old index hit a record low of 95.4.

Italy's manufacturing sector contracted for the fifth straight month in July, posting its weakest performance in over six-and-a-half years, according to the results of the latest Markit/ADACI PMI survey. The Markit Purchasing Managers Index dropped to 45.3 from June's 46.9, sinking further below the 50 divide between growth and contraction. 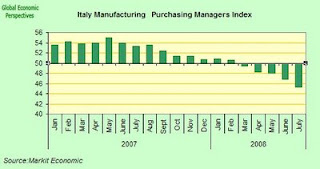 If we look at the seasonally adjusted output index we can see that Italian industrial output has been dropping almost continually since the November/December 2006 peak, and we might well ask ourselves the question, with energy prices up where they are when will this index ever rise again abover the late 2006 peak? 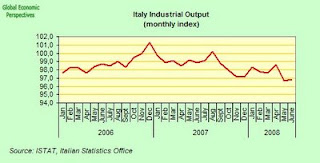 The Italian services sector purchasing managers' index also in fell in July, to a seasonally adjusted 45.6 in July from 48.5 in June. So the contraction continues, and even accelerates into the third quarter of the year. 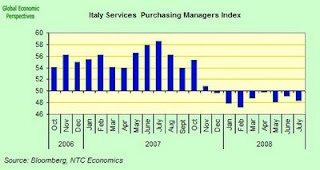 And Italian retail sales declined in July for the 17th month in a row. The seasonally adjusted PMI for retail sales was at 38.2, up slightly from the 36.3 shocker registed in June. 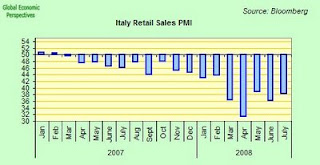 Earlier this week Italian Prime Minister Silvio Berlusconi survived a confidence vote in parliament over plans to raise taxes on oil companies and reduce salaries for mayors and public employees in a bid to balance the budget by 2011. Italy currently has a debt to GDP ratio of around 105% - way above the official EU limit of 60%. Italy is commited to at least achieving the common target of a balanced budget by 2011, but this looks to be fraught with difficulty to me, given Italy's very poor economic performance and all the negative headwinds going forward.

Berlusconi managed to clear this particular hurdle this time round without too much difficulty, since his allies in the lower house of parliament voted 312 to 239 to approve the necessary amendments to current legislation, and then passed the entire package 314 to 230.

On the spending front, the government plans to cut city, town mayor and local administrator salaries by 20%. It is not clear how much of this is serious and how much "window dressing", but since the government estimates that budget cuts at ministries will generate savings of 9 billion euros ($13.9 billion) next year, the salaries of more than a few mayors and public dignataries must be involved.

The broader economic policy outlined in the budget aims at boosting revenue and cutting spending by 36 billion euros over the next three years. And even with these cuts the deficit is expected to widen to 2.5 percent of gross domestic product this year from 1.9 percent last year, largely as a result, of course, of the current recession.

Now, if the Italian government are serious about this, and we will need to watch and wait to know since past performance is far from reassuring, then it will leave us with the clear possibility going forward of seeing an Italy with negative GDP growth in full years 2008, 2009 and 2010. Since the little average underlying net growth that Italy manages to achieve these days will largely be undermined by cut backs in government spending and the impact of continuing high energy prices on headline GDP growth.

So the big question is: are the Italian people ready for three consecutive years of falling living standards and cuts in everything, or is Berlusconi going to have trouble holding his coalition together?