Does the May Industrial Output Drop Constitute An Early Warning Signal For A Coming German Recession?

German industrial production declined for a third consecutive month in May, offering further evidence that Europe's largest economy is slowing, and reasonably rapidly. Seasonal and inflation adjusted output was down 2.4 percent from April, when it fell 0.2 percent, according to data from the Economy Ministry in Berlin this morning. That is the largest month on month fall since February 1999. Output was up 0.8 percent on May 2007, on a working day adjusted basis. 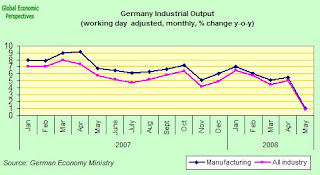 Manufacturing output was down 2.6% month on month, while construction was up 1% from April, but construction in April was already at a very low level. The seasonally adjusted industrial output index peaked in February, and has since been declining, as can be seen in the chart below. 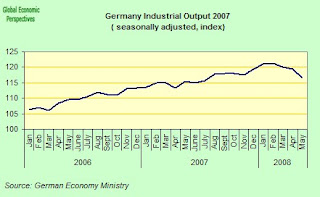 All the main sentiment indicators are now down (including the EU Composite Economic Sentiment Indicator, which came in at 101.5 in June, its lowest level since January 2006). The latest Ifo institute business climate index fell to 101.3 in June (again its lowest level since January 2006) down from 103.5 in May, and the Sentix institute index (released this morning) fell to minus 9.3 from a positive 5.2 in June. That's the lowest since June 2005 and the biggest one-month drop since the start of the index in February 2001. 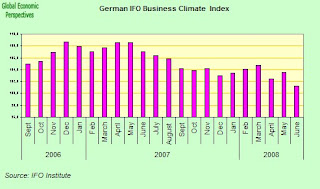 The GFK consumer confidence index was also down this month, with the forward looking index for July dropping to 3.9 from a revised 4.7 in June. Again this is the lowest reading in quite some time. In particular in their monthly report GFK highlighted how continuing high inflation was eroding income expectations and the consumer propensity to buy. According to the latest flash estimate from the German federal statistics office, inflation is thought to have hit 3.3% annually in June, and if confirmed his will be the largest price increase since December 1993. 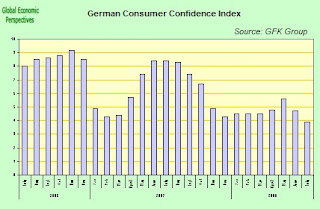 German job creation continued in May, although at a slightly slower pace than in previous months. From January to March this year, the number of persons in employment each month was by 1.8% higher than in the corresponding month of the previous year, while in April and May 2008 the increase had dropped slightly to 1.6% on April and May 2007. It is too early at this point to decide definitevely whether the current trend can be considered to mark a general slowdown on the labour market. At least part of the slowdown can probably be explained by the fact that the winter months had been unusually employment-friendly because of the mild weather, so that the usual upturn in spring was smaller, although of course this also means that growth in the earlier months of the year was not as stong as appears at first sight. So any definitive assessment of the state of the German labour market should be in "wait and see" mode at the present time, although the latest industrial output data make it hard to think that the labour market is not weakening.

German retail sales also fell markedly in June, reversing from the sharp rise posted in May, according to the most recent reading on the Bloomberg retail PMI. The index slumped from the eighteen-month high of 56.6 achieved in May to 44.9. (The PMI measures the rate of expansion or contraction. According to the Federal Statistics Office data retail sales expanded rapidly in May - 1.3% in real terms over April - but now we seem to have an equally rapid rate of contraction going into June). 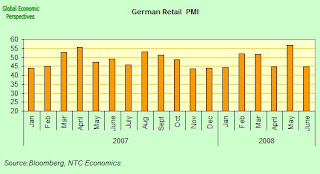 The rate of increase in exports has been slowing of late, and all eyes must now be on the May data, which is due on Wednesday.

The median of five GDP forecasts published by the German economic institutes in June predicts growth in the German economy this year of 2.2%. This really now seems a highly optimistic number, especially bearing in mind the economy may in fact have shrunk in the second quarter after expanding 1.5 percent in the first three months, according to the recent statement of Deputy Economy Minister Walther Otremba. So while it is early days yet to reach any firm conclusion I would say that the possibility that the German economy will enter recession at some point in 2008 has now risen to over 50%.


For more argumentation on this topic see my What Is The Recession Risk For The German Economy? on RGE Europe EconMonitor.
Posted by Edward Hugh at 6:55 PM