Is The End Of Oil-Driven Growth in Sight in Russia?

The FT is running the following this morning :


Russian oil production has peaked and may never return to current levels, one of the country’s top energy executives has warned, fuelling concerns that the world’s biggest oil producers cannot keep up with rampant Asian demand.
The warning comes as crude oil prices are trading near their record high of $112 a barrel, stoking inflation in many countries.


Leonid Fedun, the 52-year-old vice-president of Lukoil, Russia’s largest independent oil company, told the Financial Times he believed last year’s Russian oil production of about 10m barrels a day was the highest he would see “in his lifetime”. Russia is the world’s second biggest oil producer. Mr Fedun compared Russia with the North Sea and Mexico, where oil production is declining dramatically, saying that in the oil-rich region of western Siberia, the mainstay of Russian output, “the period of intense oil production [growth] is over”.

Now this whole situation is of interest not only for the potential implications for global oil spully and prices, but for light it sheds on Russia's short to medium term trade and current acount balance situation.

Russian consumer prices rose in March at the same annual rate as in February (12.7%), led by bread, vegetables and other food costs. Prices rose 1.2 percent from February, according to data from the Moscow-based Federal Statistics Office. Russian prices have already risen 4.8 percent so far this year (January to March). 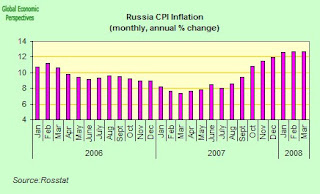 And producer prices are also rocketing, increasing by 26.4 percent year on year in February, the fastest annual rate since December 2004, and up from 25.2 percent in January, according to data from the Federal Statistics Service. Prices rose by 0.6 over January. 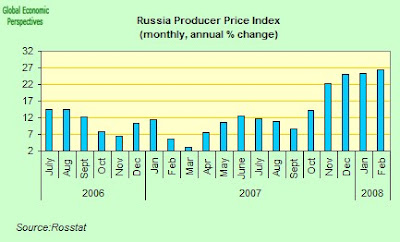 Clearly with oil exports possibly about to stagnate, and relative prices tilting so swiftly to Russia's disadvantage, the longer term balance of the external trade account has to come under scrutiny.

The Russian government's is attempting as best it can to drain liquidity from the system to try to stem the imflation haemorrage, and the budget surplus was running at 6.6 percent of gross domestic product in the first quarter, accrrding to Finance Ministry data. The surplus rose to 548.94 billion rubles ($23.41 billion) from 416.7 billion rubles in January-February. Revenue reached 1.9 trillion rubles, or 24 percent of the amount the government planned to receive for 2008, according to the statement. Spending was 19 percent of planned expenditures for the period.

Expenditures rose by 39 percent in 2007 and included spending on Russia's development bank and other new state-run institutions that seek to boost industries outside of natural resources, according to Kudrin. The budget surplus slid to 1.78 trillion rubles last year from a record 2 trillion rubles in 2006.


Car Sales on the Rise


Foreign car sales in Russia were up 54 percent year on year in the first quarter of 2007, to 454,069 vehicles, the Association of European Businesses said today. Chevrolet were the most popular, with 58,498 vehicles sold in the quarter, or 59 percent more than last year. The numbers include sales of the Chevy-Niva sports-utility vehicle, which is produced at GM's venture with OAO AvtoVAZ, Russia's biggest carmaker.

Three of the top five selling brands are locally produced, the statement said. Sales grew 44 percent in March. Renault SA Chief Executive Officer Carlos Ghosn is predicting that Russia will overtake Germany to become Europe's biggest car market within two years. The Russian car market, spurred by an economy that has entered its 10th consecutive year of growth, had sales of more than 2.3 million vehicles last year, compared with 3.15 million in Germany.

As demand increases, Renault, Ford Motor Co., General Motors Corp., Toyota Motor and Volkswagen AG have started production in Russia or are building plants, but building them is one thing, and finding the staff to work in them another.

The disputes - at Swiss food giant Nestle, French retail firm Leroy Merlin, and United Company RUSAL, the world's largest aluminium producer - have not yet hurt production, but alarm bells are going off. The Russian economy has been booming for the past nine years on the back of soaring world prices for oil and commodities. Workers from the coal mines to the corner offices want to be paid accordingly. "European quality, European standards, European wages," read one of the picket signs outside Nestle's Russia headquarters last week, as factory workers called for a 55 percent raise that would take the monthly wage to about 24,000 roubles

and Mac Broderick in the Moscow Times (St Petersburg, Detroit of the North).

Despite St. Petersburg's economic growth, the city's population has not expanded over the past few years. Demand for labor far outstrips supply, with manufacturing leaders speaking of labor shortages as a very real problem constraining the city's growth. The city and federal governments need to formulate a policy that will ensure that the most capable engineers can come from across Russia to where they are needed most. Labor mobility will help local manufacturers take advantage of economies of scale and continue to build on their investments in St. Petersburg as opposed to looking elsewhere. Simplifying the work-permit and visa procedures for foreign workers would also help to ensure that companies have the requisite personnel to grow. As labor costs rise in Russia and the ruble appreciates, these measures will be especially important. .

It's The Oil Silly

In part whether or not the predictions about Russian car demand comes true depends on what happens to oil production. Finance Minister Alexei Kudrin has urged the government to "remember the risks" that come with Russia's reliance on oil revenue and said spending growth should be slowed. Kudrin spoke on April 8 at a meeting with Sergey Ignatiev, the Russian central bank chairman, and Cabinet members including Economy Minister Elvira Nabiullina.

And as if to add strength to his warning Energy and Industry Minister Viktor Khristenko has announced that Russia is going to cut taxes on oil companies to counter what he terms production "stagnation" following a decade of growth, "The output level we have today is a plateau, stagnation," Khristenko is quoted as saying "We hope the debate on tax changes will be complete within two or three months."

Khristenko, a former acting prime minister who has overseen the world's largest energy industry for four years, said he and Finance MinisterKudrin have agreed on draft tax legislation. The only remaining question is how big the cut is going to be. Finance Minister Alexei Kudrin said last month that the government may cut its crude-extraction tax by 100 billion rubles to spur development of harder-to-reach deposits.

Industry experts remain, however, sceptical that such measures can be effective.

Output is set to fall this year for the first time in a decade as producers struggle with soaring costs and aging fields. Production in Russia, which is the world's the largest oil supplier after Saudi Arabia, declined 1.3 percent in March to 9.76 million barrels per day compared with March 2007. Natural Resources Minister Yuri Trutnev warned last month that 2008 could see a drop in output for the first time since 1998.

So the question really is can Russia get its inflation problem sufficiently under control, and its domestic industry sufficiently competitive to overcome the present one sided over dependence on oil and other commodity incomes. An interesting question indeed.
Posted by Edward Hugh at 9:51 AM