Quite a bit of Spain related data has come out over the last few days, including the latest flash estimate for CPI inflation from the INE, which came in at 4.4% for the second month running. 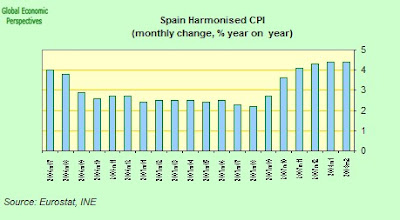 Given that most of the Spanish economy is slowing rapidly this sort of inflation is likely to prove itself to be a real headache, especially over at the ECB. The problem is only added to by the latest reading on the producer price index which was up 6.6% year on year in January, indicating that there is still a lot of inflation momentum in the system. 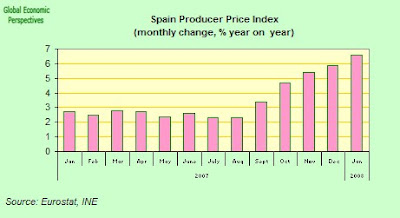 The European Commission also reported at the end of last week a further steep decline in its eurozone “economic sentiment” indicator for February, with the composite number reaching its lowest level since December 2005. The indicator, which gauges optimism across all economic sectors and is regarded as a good guide to likely future trends, fell to 100.1 points in February from 101.7 in January.

This seems to imply a significant deceleration in activity, although the picture is very variable. France is holding up better than most, and Germany (as explained here) is hanging on in more than I personally expected, but Italy is very much in the doldrums already, and the two "construction driven" eurozone economies (Spain and Ireland) are in strong downward retreat. 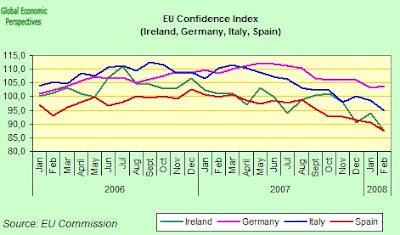 The countrywide fall was led by the service sector but the index for Spain, were the impact of a bursting property bubble is in the forefront of everyone's mind, was especially pronounced. With a reading of 87.5 the indicator hit its lowest level since January 1994. Italy’s index also dropped steeply, to the lowest level since August 2005.

One measure of the slowdown in activity is the rate of expansion in industrial output, which has proved rather volatile, but the rate slowed notably during the year, with the year on year changes being neagtive in both November and December. 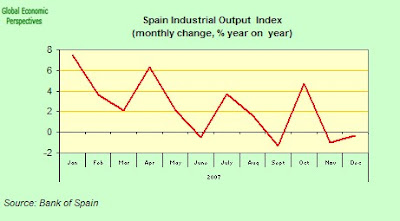 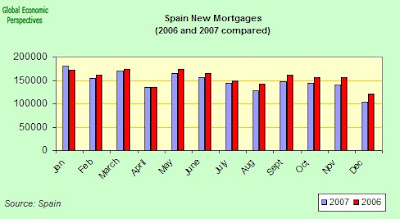 Finally we have what Wolfgang Munchau calls in his weekend op-ed in the Financial Times his favourite current chart (although why anyone would call such an appaulingly depressing picture a favourite is beyond me) - the one from the Bank of Spain which shows how building approvals and permits have (and I quote him) "fallen off the edge of a cliff since the end of 2006". 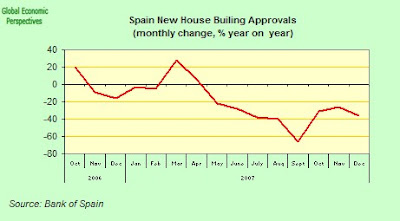 As Munchau points out, at their peak in March 2007, house building permits were rising at an annual growth rate of 25 per cent. In the autumn of 2007, their annual change had dropped into the region of minus 20 per cent. The situation in terms of approved starts is even more dramatic, since these rose at an annual growth rate of close to 28 per cent in March 2007. By September the annual rate of change had fallen to minus 66 per cent. House prices have not fallen significantly in Spain yet, but this is surely only a matter of time, and especially when we come think about the large stock of unsold new homes (estimated at 500,000 as of March 2008) waiting on the books, and the drop in the number of mortgage loans mentioned earlier in this post.

Munchau correctly ties the capital inflows which have taken place to finance the previous boom with the huge balance of payments surplus Spain currently runs (Spain needs in the region of 9 billion euros in external finance a month to keep this afloat), but I'm not sure he has yet appreciated what a problem for the Spanish banking and indeed whole eurosystem this financing problem can become, since while he correctly points out that in the Spanish case "there can be no currency crisis....since Spain does not have its own currency", he omits to ask himself the equally pertinet question as to whether or not there could be a banking crisis. As I try to argue in this post there most certainly can.
Posted by Edward Hugh at 10:46 AM

BEing from Spain, I think the coming general elections will make a huge impact of how low does the Spanish economy goes. If the socialist party wins and keeps refusing to make structural changes to the rigid employment practices, business owners will have few incentives to hire new workers because of the expensive firing costs.

This simple sentence from the Miami-based Spanish mortgage broker has hit the Spain situation right on the head: Crazy labor laws that have been gathering through 50 years of labor coddling aimed at civil peace.

Herman M. Vilella-Coll
Former Spain Analyst for the US Government