Well the great Baltic economy overheating debate is now gradually drawing to a close as it becomes increasingly clear in each of the three cases (Latvia, Lithuania and Estonia) which way the cookie is eventually going to crumble. Today it is Latvia's turn as we now have a more complete set of data on Q4 2007 Latvia GDP from Latvijas Statistika (following the preliminary release covered here), and the most important detail is that they have revised their year-on-year growth estimate down to 8%. Unfortunately in the actual release the statistical office don't enter into any detail about the quarter itself, and in particular don't give a number for quarter on quarter growth. So, since the number looked very small and I was curious to know what the actualy quarterly performance was I went and checked in the database, and here is a summary of what I found. 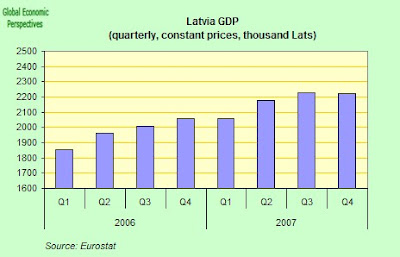 Basically if you look at the last two bars on the above chart you should be able to just make out that - at constant prices - Latvian GDP actually declined between Q3 and Q4 2007, down to 2.222 billion Lat from 2.227 billion lat in Q3 2007. That is a DROP of 0.23% (my own calculations) which might seem small but we should bear in mind that in Q3 the Latvian economy was still growing at a quartery rate of 2.8% (or around 11% annualised) so movin from this to an annualised negative growth rate of around 1% is not at all small beer, and constitutes very rapid deceleration indeed. So while the actually data point may not seem like much, the implications are really quite profound. Technically we could consider a recession as two quarters (back to back) of negative growth. Well, we just had one of them it seems, and with all the dials continuing to show negative we are surely now in the third month of the second one. Which means, on my call, that Latvia is fully in recession at this point, and the only question really left is how long and how deep the recession is going to be.

Of course you can get some idea of the speed of the slowdown from looking at the year on year growth chart, but this doesn't really give us enough detail at this particular point in time to get hold of the actual process taking place. 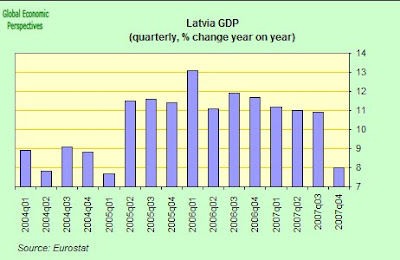 To answer one small potential quibble in advance, the Latvian Statistics Office do not seem to publish seasonally adjusted quarterly data, so I am working from original series numbers (corrected for constant prices). However, if we look at the cahrt from GDP on a quarterly basis since 2000, we can see that the seasonal variance is not large, and that in no previous Q4 so far this century has GDP actually fallen, and if there has been any notable seasonal impact it is in a slight slowing in Q1, when bad weather will presumeably have affected construction activity, and retail sales may be slow in the post xmas period. The current slowdown in construction has little to do with seasonal factors, and everything to do with the cutting off of the credit supply by the Scandinavian banks back in the late spring. 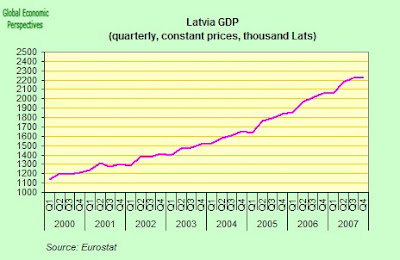 Moving on to look now at the Q4 "uses of GDP" side, the only area which showed positive movement was in fact the much berated area of government spending, which I think basically vindicates both me and the Latvian government for saying that during the last quarter of 2007 it was ridiculous to continue talking about trying to run a fiscal surplus since the economy had already turned (six months earlier, and then previous to that was a very different matter). If we start by looking in detail at private consumption for Q4 we will find that this was down from 1.637 billion Lats in Q3 to 1.612 billion in Q4 (or by -1.55%). 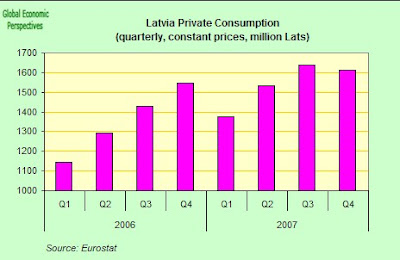 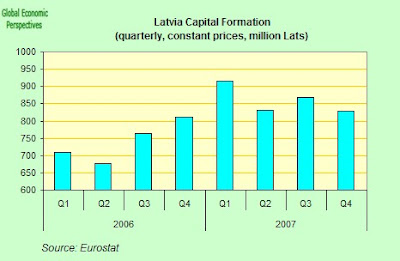 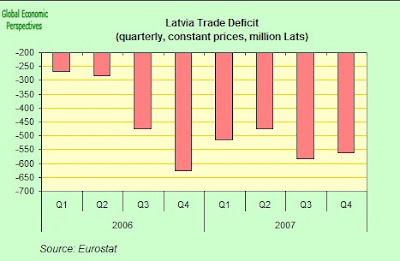 As I say the only really strong point in all of this was government consumption, which increased from 303.5 million Lat in 343.3 million Lat in Q4 (or up by a hefty 13.1%). Since the Latvian economy now needs a very heavy and rapid blood transfusion if it is not to swoon completely, more power to the elbow of government spending in the short term should be the watchword from where I am sitting. The economy now urgently needs some sort of platform placing firmly underneath it, since otherwise with this rate of contraction the danger is that as the inflation peters out it will be followed by sharp and severe deflation. 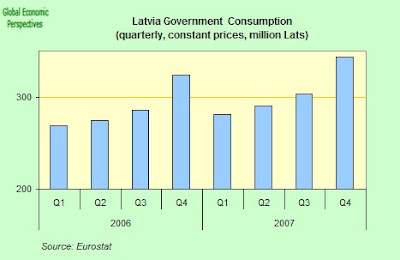 So as a say at the start of this post, the great "hard landing - soft landing" debate is now effectively over, and a hard landing it is (although I haven't seen the touch judge raising his red flag yet). The only real outstanding issues now are how long the Lat peg can hold, and what to do now to drag the economy out of the mire into which it is steadily sinking.
Posted by Edward Hugh at 11:00 PM

Ok, the picture looks really gloomy. While IMF and WB gladly give the loans, the question is what industries the government is upholding for the economy not to sink into deep hole. Another question is how protective policies may influence trade balance, tariffs and where the subsidies are going.
In other words, unless the Lativan government resistant to subscribe to completely free market, the economy is in a free fall.