Toshihiko Fukui's Term At The BoJ

Toshihiko Fukui will retire as governor, after five years at the helm of the Bank of Japan, on the 19th March. His successor may well be announced this week. This morning in the Financial Times David Pilling has a long, and very "fair and balanced" asseessment of Fukui's time at the BoJ, which is more than worthwhile reading for those of you who would like to understand the workings of this venerable institution just a little better. As Pilling's concluding paragraphs make clear, what would seem to matter most in this case isn't so much what just happened, as what gets to happen next:

“Fukui has often been portrayed as chomping at the bit to raise rates,” says Ben Eldred of Daiwa Securities “The truth is that Fukui’s BoJ has been fairly pragmatic – waiting until relatively late in the economic cycle before raising rates, doing so only very gradually and pausing as soon as it became clear that the global economic outlook had worsened in 2007.”

The pause to which Mr Eldred refers has lasted a year. As well as a response to international circumstances, the delay also reflects the failure of the domestic economy to click into gear as Mr Fukui has long predicted. The governor has continually stressed his belief that record corporate profits will feed through into higher wages and consumer demand – a “virtuous circle” that might have been a good justification for the bank’s forward-looking policy.

Unfortunately, it has not panned out. Wages have stalled or even fallen as global competition, coupled with labour market and demographic changes, has short-circuited the normal mechanism by which profits flow into remuneration.

This has left Japan’s economy running on only one, export-led engine and flying too close to the deflationary ground for comfort. What headline inflation there has been is due almost entirely to higher oil and commodity prices. If commodity-led inflation fades – as many predict if the global economy slows – Japan could yet crash-land back into deflation.

Markets are factoring in the possibility that the BoJ’s next rate move will be down – not up as the governor has long intimated. It would be a severe blow indeed for the bank to put hard-won interest rate rises into reverse. But if the day for such a decision arrives, at least it will not be Mr Fukui’s to make.

Basically I think Fukui's big bet was that domestic consumption would prove strong enough to provide a second leg (in tandem with exports) for the Japanese economy. As Claus Vistesen details at great length here (and here) - and as Pilling also seems to accept -this view seems to be inadequate, and fails to get to grips with the malaise which is affecting the Japanese economy. And as if to give just one last kick to this now thoroughly wobbly perspective, todays index for December services has just been published by the Japanese Trade Ministry. The tertiary index, which is a measure of the money households and businesses spend on things like phone calls, power and transportation, declined 0.6 percent from November. The Ministry listed the following sectors as having declined:

Although the index actually rose some 0.2 percent over the fourth quarter, this latest sign of weakening will certainly not come as good news for Fukui as he prepares to clear up his desk. 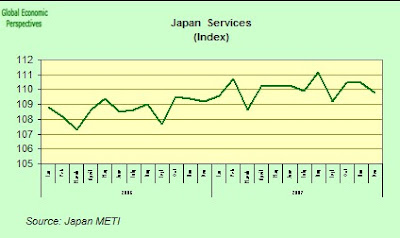