The use of non-local-currency denominated loans has become a widespread phenomenon in Eastern Europe in recent years. In Hungary the most common currency for such purrposes is the Swiss Franc and around 80% of all new home loans and half of small business credits and personal loans taken out since early 2006 have been denominated in Swiss francs. A similar pattern of heavy dependence on foreign currency denominated loans is to be found in Croatia, Romania, Poland, Ukraine (US dollar) and the Baltic States, although the mix between francs, euros, the dollar and the yen varies from country to country.

So let's look at the extent of the issue in Hungary, and some of the likely implications. First off, here's a chart showing the evolution of outstanding mortagages with terms over 5 years since the start of 2003. As we can see the outsanding debt is now over 5 time as big as it was then. 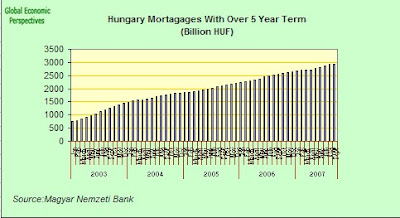 Now if we look at the growth of forint denominated mortgages over the same period, we can see that while they initially expanded very rapidly, they peaked around the start of 2005, and since that time they have tended to drift slightly downwards. 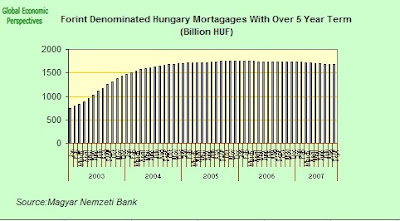 Then if we come to look at the growth of non-forint mortgages, we will see that since early 2005 the rate of contraction of such mortgages has increased steadily. 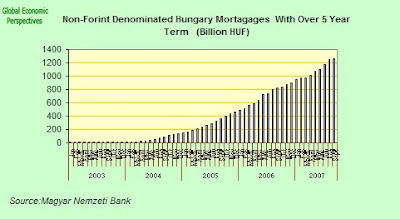 Finally, if we look at the distribution of non-forint mortgages between those in euros, and those in "other" currencies (which may contain some yen, and some USD mortgages, but in the main will be Swiss Franc ones) we can see that those in euro form only a very small part of the total. 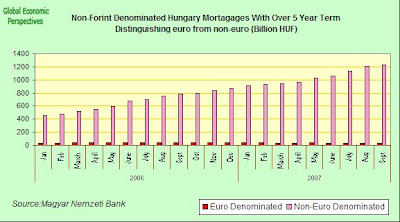 It is perhaps also worth pointing out that the fashion for non-forint loans is not restricted solely to mortgages, car loans and other longer duration personal loans also tend to be denominated in Swiss Francs or other currencies. The reason for this is obvious, the rate of interest is cheaper. But this non forint loan predominance has two important consequences.

In the first place the Hungarian central bank does not have sufficient control over monetary policy inside the country, being to some significant extent influenced by monetary policy in Switzerland, a country we may note which is not even inside the European Union. Secondly, the difficulties which would present themselves in the event of any substantial reduction in the value of the forint would be considerable - the is known as the translation problem, and is ably reviewed by Claus in this post here - and as a result the central bank is one more time a prisoner of others in terms of monetary policy, since it cannot take interest rate decisions which might influence excessively the swiss franc-forint crossover rate. 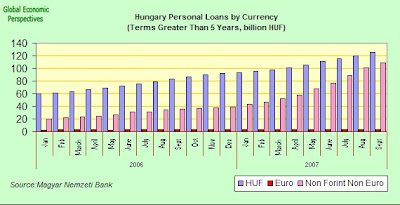 The fashion for borrowing in Swiss francs really took off in Eastern Europe after the Swiss National Bank dropped interest rates to 0.75% in 2003 in order to stave-off a perceived deflation threat, a move which at the same time converted Switzerland into the cheapest source of loan capital in Europe. External lending in Swiss francs reached $643 billion in 2006, according to data from the Bank for International Settlements . The huge scale of the borrowing in fact drove the Swiss franc to a nine-year low against the euro, and has lead to an accelerating slide in its value over the last two years - even though by this point the Swiss National Bank had been busy raising rates (Swiss interest rates have now been increased 7 times since the 2003 trough). The extreme weakness in the Swiss Franc is in fact rather perverse (shades of Japan, of course, here), since currently Switzerland enjoys the highest current account surplus in the developed world (some 17.7% of GDP in 2006). At the same time the Swiss hold more than $500 billion in net foreign assets, making them in these terms the wealthiest nation on earth.

A recent issue of the Bank for International Settlements publication Highlights of International Banking and Financial Market Activity has some revealing comments on the Swiss situation(the data used for the report came from 2006):

Total cross-border claims of BIS reporting banks expanded by $1 trillion in the last quarter of 2006. After more modest growth in mid-2006, a pickup in interbank claims accounted for 54% of this expansion. A surge in credit to nonbank entities contributed $473 billion, pushing the stock of cross-border claims to $26 trillion, 18% higher than in late 2005.

The flow of credit to emerging markets reached new heights through the year 2006. Claims on emerging markets grew by $96 billion in the final quarter of 2006, bringing the volume of new credit throughout the year to $341 billion. This amount exceeded previous peaks ($232 billion in 2005 and $134 billion in 1996), both in nominal value and in terms of growth. The current annual growth rate has risen to 24%, having surpassed for the sixth consecutive quarter the previous peak of 17% recorded in early 1997.

Emerging Europe overtook emerging Asia as the region to which BIS reporting banks extend the greatest share of credit. Since 2002, growth in claims on the region has consistently outpaced that vis-à-vis other regions. With a record quarterly inflow, emerging Europe received over 60% of new credit to emerging markets, bringing its share in the stock of emerging market claims to 34%. Less of the new credit went to the major borrowers (Russia, Turkey, Poland and Hungary) than to a number of smaller markets, notably Romania and Malta, as well as Ukraine, Cyprus, Bulgaria and the Baltic states.


The currency denomination of cross-border claims on emerging Europe tilted further towards the euro. In the stock of claims outstanding, the euro and dollar shares were 44% and 31%, respectively, but the gap in the latest flow data was more pronounced (61% and 5%). While the sterling share has remained close to 1%, the yen has lost ground to the Swiss franc, thus continuing a trend seen over the last six years. Yet there is little evidence in the cross-border data of unusual borrowing in Swiss francs that might correspond to Swiss franc-denominated retail lending in several countries. Borrowing in the Swiss currency remains on average below 4% of cross-border claims, and exceeds 10% only in Croatia and Hungary.


Nearly 20% of reporting banks’ foreign claims were in the form of funds channelled to emerging market borrowers. Claims on residents of emerging Europe continued to account for the largest share of these funds.

So, although the BIS find "little evidence in the cross-border data of unusual borrowing in Swiss francs that might correspond to Swiss franc-denominated retail lending", they do make an exception in the cases of Hungary and Croatia, where they note that lending in Swiss francs to retail clients reaches over 10% (and of course in the Hungarian case well over 10%) of the total retail loans in those countries. Indeed, as I indicate above, swiss franc loans now seem to account for over 80% of all newly generated housing related credit in Hungary. The reason why Hungary has gone for Swiss franc rather than euro denominated loans undoubtedly has to do with the role of the Austrian banking sector in Hungary, as is explained in my fuller posting on this topic linked to below.

For fuller examination of just why it is that Switzerland (or for that matter Japan) have such low interest rates, see my "Swiss Franc Loans and Ageing" post.

For an examination of the potential implications of the presence of all these foreign currency loans across the EU10 in the event of any generalised emerging markets crisis see Claus Vistesen "Translation Risk in the Baltics and Other Matters".
Posted by Edward Hugh at 5:10 PM