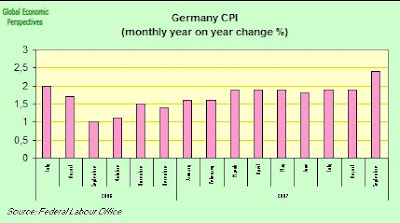 The rather high year-on-year rate of change was due above all to the price development of mineral oil ­products. The prices of both motor fuels (+8.9%) and liquid fuel (+3.1%) rose in a year-on-year comparison, basically as a consequence of the marked price decrease observed for these products in September 2006. That basis-related statistical effect is the main reason for the price increase recorded in September. Not considering the price development of mineral oil products, the year-on-year rate of change would have been lower in September 2007, at 2.2%. Also, electricity prices (+7.4%) rose above average over the one year period, while prices of other energy products saw smaller increases than total consumer prices (including charges for central and remote heating: +2.2%, and gas: +1.4%).

The small price increase of 0.1% against August 2007 is due to opposite seasonal price developments. In addition to price decreases for fruit (–3.1%) and vegetables (–2.4%), there were the usual drops in the prices of accommodation services (–8.9%) and package holidays (–5.8%). In contrast, consumers had to pay an average 3.1% more for clothing and footwear than one month earlier as the summer collection was replaced by the autumn and winter collections.


The harmonised consumer price index for Germany, which is calculated for European purposes, rose 2.7% in September 2007 on September 2006. Compared with the previous month, the index was up 0.2%. 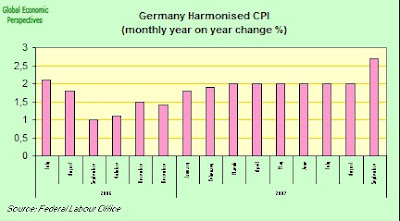 All in all, while there is nothing dramatic here, and many of these factors will work their way out of the pipeline in due course, this data will make it very difficult for the ECB to talk its way out of the corner it has boxed its way into and announce it is going to start reducing interest rates.
Posted by Edward Hugh at 1:49 PM