Well we are still with the sentiment indexes at the moment, but real data is surely not too far behind now. As was only to be expected, German business confidence fell more than most economists forecast in September, reaching a 19-month low, on concern the strength of the euro and increasing cost of credit will sap economic growth.

The Ifo sentiment index, based on responses from 7,000 executives, dropped to 104.2 from 105.8 in August, the research institute said in Munich today. 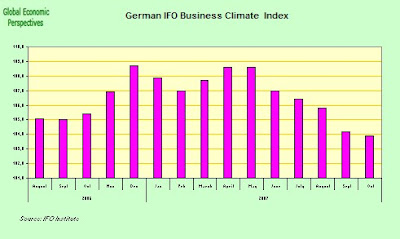 Obviously we peaked back in the spring, and have been on our way down ever since.

Last's weeks ZEW index was broadly similar in its generalised pessimism on the immediate outlook: 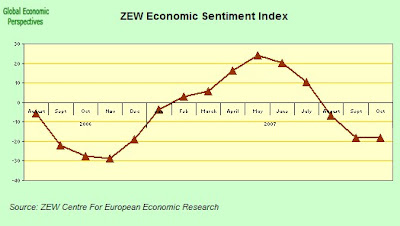 The euro's climb to a record $1.4130 is obviously putting a break on German exports heading outside the EU, and in particular after the U.S. housing slump has so badly roiled financial markets.

Forecasts for growth next year are now tumbling down all over the place. The Cologne-based IW institute yesterday substantially cut its growth forecast for the German economy for next year, predicting growth will slow to 1.9 percent next year from 2.5 percent in 2007. It previously forecast a 2008 expansion of 2.2 percent. Even the European Commission is begining to accept reality, and on Sept. 11 trimmed its 2007 forecast for the 13-nation euro region ever so slightly to 2.5 percent from 2.6 percent. Doubtless there will be more to come from this source.
Posted by Edward Hugh at 1:39 PM