Well, London interbank lending rates for overnight dollar deposits hit their lowest level since mid-August today, that is since just before the recent liquidity squeeze began (Libor overnight dollar rates at the daily fixing fell to 5.18125 percent). For those of you who are interested in such arcane matters, here the chart of the fluctuations up to 4 Sept, which is the latest date for which the BBA have released data. 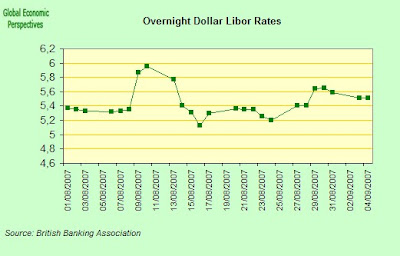 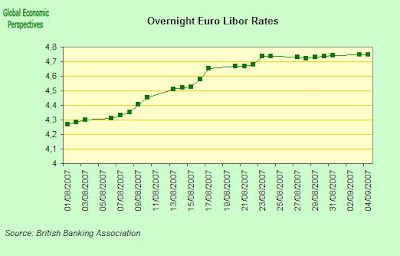 This situation is presumably behind The European Central Bank (ECB) announcement today that it was pumping €75 billion ($105 billion) into the market in a renewed attempt to ease tight credit conditions and smooth interest rates. The ECB said the additional liquidity, which had a three-month term attached, was the second move of its kind in the history of the bank. In the first such operation announced on August 22, the ECB added €40 billion over three months.

For those of you who are not interested in such matters but who think that maybe you should be, Libor rates are interesting to follow in "complicated moments" since they do offer a sort of rough and ready indication of "sentiment" in the banking sector. As Meyrick Chapman, fixed income strategist at UBS, says (in the above linked article):

"Libor is not just banking problems. It relates to funding costs of corporates and other borrowers. For a broader economy this effectively means 100 bps tightening (in UK rates)."

The FT had this to say:

The European Central Bank on Wednesday loaned commercial banks €75bn ($104bn) for three months, a sign that institutions in the money market remain wary of lending to each other for periods of more than a week.

The Frankfurt-based central bank said 140 banks had applied for €139bn in central bank deposits, agreeing to pay an average interest rate of 4.52 per cent as compared with current interbank prices of 4.75 per cent.

n a sign that short-term lending may be normalising, the ECB drained €60bn in so-called overnight cash from the market. But commercial banks remain reluctant to lend to each other for long periods.

As a result, demand for longer-term central bank loans is up. The €139bn in three-month ECB loans the banks bid for compares with €126bn in bids when the ECB carried out a first special three-month tender in August.

The size of Wednesday’s allocation of cash – €75bn against €40bn last month – also showed that the ECB recognises that longer-term interbank lending has become more fraught, and that it remains willing to act.

At the same time the euro just hit an all time high against the dollar:

The dollar dropped to a record low against the euro on Wednesday as concerns over a US economic slowdown continued to weigh on the beleaguered currency.

So the euro now looks set to break the $1:40 frontier. So if we factor in the fact that 3 month libors are now at least 50 base points above where they should be AND the euro can have risen nearly 5 cents vis a vis the dollar in a month or so (which is worth, lets say, another 50 bps or something of tightening). Then what has happened is equivalent to a full 1% rise in the ECBs refi rate, or put another way a significant monetary squeeze. If we take onboard then the fact that Italy and Germany were already slowing considerably before we got into August, and that Spain - which has been so housing dependent - has now been sent off into unknown territory, then I think we should all be reaching the conclusion that problems of some kind are now well into the pipeline.

The BBA link to the libor data is here.
Posted by Edward Hugh at 2:41 PM