Japan, So What Gives With Wages?

Bloomberg reports today on the latest data on Japanese wages from the Labour Ministry:

Monthly wages, including overtime and bonuses, dropped 0.7 percent in April from a year earlier, the Labor Ministry said on May 31, the fifth month of declines. The same period, households increased spending for a fourth month, capping the longest winning streak in three years.

They also draw attention to the latest report from the Cabinet Office on Consumer Confidence.

Japan's consumers became more pessimistic in May as wages fell, undermining the outlook for consumer spending. Confidence among households with two or more people fell to 47.3 last month from 47.4 in April, the Cabinet Office said today in Tokyo. A reading below 50 means pessimists outnumber optimists.

So all of this is becoming something of a puzzle. I mean we can understand to some extent - given the life cycle savings and consumption model - why demand may be weakening internally, but why are wages falling, shouldn't - according to standard Neo-classical theory - they be rising as the labour force declines and the labour market tightens?

Certainly unemployment in Japan has been trending steadily down, as can bee sen in the graph below which comes from the Labour Force Survey of the Japan Statistics bureau: 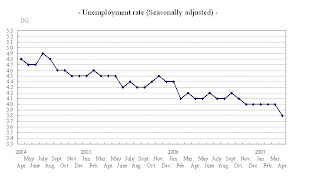 Now in part the decline in unemployment is a natural response to the - largely export driven - extended economic boom Japan has been enjoying recently, but this is certainly not the WHOLE story, since Japan, as is well known, has an ageing population, and in addition the population is actually now declining (and has been since 2005), as, of course, is the population of working age (and hence the workforce, if we take this as the conventional 15-65 age group, but see below). As such, absent immigration (and generally speaking Japan does not have any immigration worthy of mention as can be seen in this post) it is hard to see where Japan will find the labour to sustain economic growth into the future. 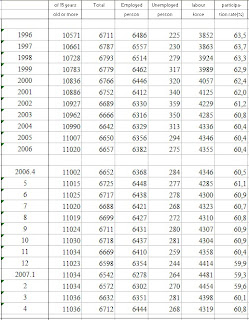 This chart has been extracted from an excel file which constitutes Table 1 on this page.

Now what can be readily seen is that while the total population started to decline in 2005, the working population (which is Japan is defined as everyone OVER 15) has been climbing (albeit slowly and steadily) for the last couple of years, a feature which is undoubtedly due to the growing proportions of the population in the older old age groups, and slowly increasing life expectancy. On the other hand, if you look at the totals for employed people, you will see that this actually peaked in the late 90s, and while the number has been climbing of late, we have still not reached the peak achieved at that time.

Although the data in the table is not seasonally adjusted, and thus difficult to intrepret, there does seem to have been a significant jump in employment in May 2007 (up to 64,440,000 from 63,351,000 in April, although this may yet be revised). Until we see more data it is hard to know exactly what to make of this, since in general we have been seeing signs that the Japanese economy has been slowing somewhat in 2007.

On point which is also worthy of attention is the percentage of employment which is part-time. This has been growing, and was up to 29% of total dependent employment in 2005 from 19% a decade earlier (this being the latest data I have to hand).

Another aspect which should not be forgotten is that the Japanese are fairly long-living, and participation rates in the higher age groups are high by international standards, as the chart below indicates. 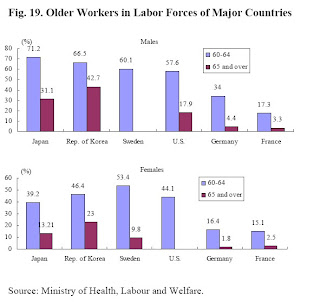 So, all in all, a rather puzzling picture, where one thing seems clear, the current expansion is going to hit labour capacity limits at some point or another.

Meanwhile I have found some additional data on part-time employment as a percentage of total employment. In April 2007 - according to the Provisional Report on the Monthly Labour Survey - there were 11,352,000 part time jobs, and 32,770,000, which means that roughly 26/27% of employment was part-time. The Report also makes the following observation:

Which seems to suggest that part-time employment has been growing rather more rapidly that full-time in recent months.

In line with this observation, the March Report says this:

The February report says this:

So the trend towards part-time work is definitely there, and this is obviously being reflected in average salaries. What will be interesting to look at will be the May 2007 data, to see how much of the new employment this month is part-time.

Now we can see that part-time employment is definitely part of the picture. But I have another nagging question in my head - and this really comes from taking a long hard look at the German situation (another ultra-long post coming tomorrow on this) - and it concerns the role of outsourcing and its interaction with the evolution of the skill premium in the context of rising skilled labour demands in the context of declining cohorts. The issue is simply this: what is the skill composition of the work Japan is currently outsourcing? If they were outsourcing work with a comparatively high skill composition this would explain a lot (and this is what Germany is doing). But at this stage this is nothing more than a wild guess. I must go and hunt data.
Posted by Edward Hugh at 12:30 PM