There's a lot of debate in the EU these days about whether Turkey is a suitable candidate for membership. Many opponents point to Turkey's record on human rights, and the deep religious conservatism in some parts of Turkish society as obstacles to joining. I think it is important to keep in mind the potential of the EU as a motor for facilitating change. Poland would be a case in point. When I was studying Bulgarian immigrants in Spain, it was clear that a majority of the migrants wanted to return home when they could. The two big exceptions members of ethnic minorities (particularly from Bularia's Turkish minority, but also Pomacs) and those who wanted to be able to freely express their sexual orientation. Well by joining the EU you can now increasingly do this without resort to external migration. Well done EU. 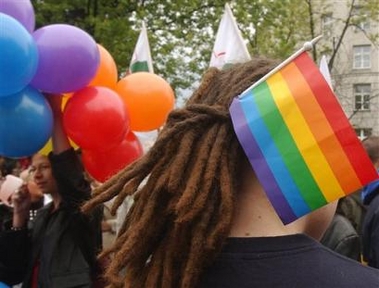 "More than 2,000 people defied a ban on a gay-rights rally in Poland's capital, taking to the streets of Warsaw on Saturday against the orders of the city's conservative mayor. Gays, lesbians and their supporters carrying banners with slogans including "A gay is not a pedophile" and "Law and justice for all" rallied near parliament and marched to the Palace of Culture, a Stalinist landmark. It was the second year Warsaw's mayor, Lech Kaczynski. had banned the gathering."
Posted by Edward Hugh at 10:40 AM